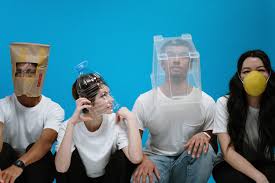 Fearmongers – comprised of plastic politicians, the misinformation mainstream media and social media, Hollywood hoaxsters and so-called academic elites – have orchestrated an organized effort to make people believe that the wearing of masks, in public places (e.g., schools), is necessary in the battle against the coronavirus. Their fraudulent posturing, however, is not grounded in any science or medicine; contrary to their propaganda, the vast majority of credible medical doctors and scientists state that masks do, literally, nothing to protect wearers from being infected with COVID-19. A simple Google search will result in easily obtaining this uniform, critical information.

The proposed mask-wearing mandate is so farcical that even the government’s propounded chief epidemiologist expert, Dr. Anthony Fauci, told the public, on March 8, that masks do almost zero – anyone can watch his refutation of masks commentary here in a CBS “60 Minutes” interview, where he affirmatively said, “There is no reason to be walking around with a mask.” It is indeed correct that Dr. Fauci, like in so many other matters, later reversed himself. His reversal, however, is quite notable in that he specifically stated, in this NBC News TV appearance, “Early on, when we were in a situation in which there was a real concern about the lack of personal protective equipment on the part of the health providers who needed it who put themselves in harm’s way every day to take care of people who were ill with this virus that we were thinking we would run out of masks and other things for them so the recommendation was not to wear a mask because of the shortage of it…”

Dr. Fauci, accordingly, has told the American public that on March 8, 2020 (when he proclaimed “There is no reason to be walking around with a mask”), he actually thought that masks were necessary for all people–but that he did not tell Americans because he didn’t want a mask shortage for medical personnel to occur? This clear-cut contradiction renders a complete lack of credibility in his words about masks. It’s not as if the doctor claimed that he later learned something “new” about mask-wearing…The bottom line: the wearing of masks, obviously, cannot, in reality, be necessary in Dr. Fauci’s view. If they were truly needed, would the country’s top government-employed epidemiologist – a man who appears to be a good human being – actually advise the masses that masks do almost nothing and are unnecessary? Nah, the in-your-face reality is that he, simply, believes what he told everyone on March 8, 2020–that masks are not needed.

More so, voluminous non-government doctors (i.e., doctors who are not involved in politics) have refuted the notion that masks assist in protecting the wearers from contracting the coronavirus. The masks have the same effect against the coronavirus as they do for the flu and other diseases that are transmitted from person-to-person. The coronavirus and the flu should both be taken seriously. That said, Americans do not, and should not, don face masks because of the existence of the flu (or other similar viruses prevalent in society). Likewise, Americans should not be compelled to strap face coverings across their heads because of the coronavirus, a disease that, factually, has turned out to have a lower death rate than the flu. The detriments in wearing face masks far supersede any purported benefit in the compulsion of wearing them.

Aside from the overwhelming medical and scientific data that face masks do not act to inhibit wearers from contracting COVID-19, it is vital to explain that face masks cause many people to suffer debilitating symptoms and to be infected with other diseases that are at least equally problematic to human beings as the coronavirus. A significant percentage of people wearing face masks become disoriented, confused, and fatigued; and many are allergic to the masks. They suffer from dehydration, and, most palpably, they are continually breathing in excessive amounts of their own carbon dioxide, which, so obviously, creates health problems. These detrimental health issues caused by individuals being forced to wear masks have been documented by numerous, unbiased physicians and scientists, wherein examples of such reports (and examples of reports that show the ineffectiveness of face masks) can be found in the below articles, videos and TV appearances:

Masks are Neither Effective Nor Safe: A Summary of the Science

Reality Check with Ben Swann: The Science Behind Why Face Masks Don’t Work

Laura Ingraham on The Ingraham Angle on Fox News Channel

Very sadly, the confounding dubious activities of the plastic politicians, the misinformation mainstream media, Hollywood hoaxsters, so-called academic elites – and mindless social media warriors – have fruited in otherwise thoughtful, intelligent people believing that masks are a benefit. The factual scientific data, ultimately, should lead such individuals away from the propaganda-wielding politicos and back to rationale. The agenda of the politicos is one that is simply rooted in their underlying namesake, to wit, “politics.” Beyond all else, it is unnerving that, like multiple times in nefarious history, when politicos sought to “mark” their populations with a symbol or item, all said populations succumbed to being ruled over by dictatorships.

Masks are not only unnecessary, but they are detrimental to people’s health – and they are awful scary.