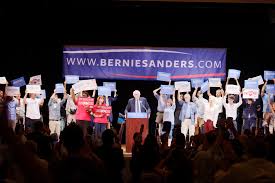 Bernie Sanders has dropped out of the presidential race, suspending his campaign. But does that mean that Joe Biden will just walk in and obtain the Democrat nomination? Maybe not. Why? Because of there still may be the possibility of a brokered convention.

With President Trump having the full backing of his party, a brokered convention is not a consideration, but what about on the Democrat side? With sanders out, that just leaves Biden. The vast majority of progressives are not fans of Biden. More so, it is often difficult for Biden to string together more than a few sentences without either making a monstrous gaffe or just, plainly, losing his train of thought. many Democrats are quite concerned, and do not see him as a viable 2020 presidential candidate. Some, who perhaps liked him for the post in the past, are not rather reticent. And this may lead to a brokered convention, where Biden could be pushed out. In favor of who?

First and foremost, Michelle Obama (if the Obamas think this a winnable election by the Democrats, which it is not). Then to: