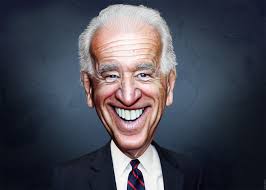 THINK ABOUT IT!  Joe Biden is the most popular democrat candidate.  Democrats truly believe that he is the only hope for the Dems to beat Trump in 2020.  However, Joe continues to add insult to injury given his many gaffs so far and the list will continue to grow.  “We believe in truths vs. facts.”  “The poor are as smart as the whites.”  “When I was Vice President and walked with the Parkland students up the hill.” These are just a sample of what Republicans are wondering out loud is reflective of age-related dementia, while asserting that Dems are secretly worried about the same.   Biden’s team attempted to whitewash the particularly outrageous claim about Parkland by saying he confused it with the Sandy Hook shooting.  However, during the aftermath of Connecticut, there was nothing reported about Joe Biden walking with students up a hill.

And what about his policies which are out of touch with reality.  At a time when the U.S. faces its fiercest advisory, Joe’s initial remarks in a rally attempting to mock Trump about China were:  “China is going to eat our lunch? Come on, man…they can’t even figure out how to deal with the fact that they have this great division between the China Sea and the mountains in the east, I mean in the west.”

Particularly sad were Biden’s wife’s comments urging support of her husband at a campaign event  in Nashua, N.H.  “Your candidate might be better on, I don’t know, health care, than Joe is, but you’ve got to look at who’s going to win this election and maybe you have to swallow a little bit and say, ‘Okay, I personally like so and so better,’ but your bottom line has to be that we have to beat Trump.”  However, these remarks do embody the reason for Joe Biden to continue to run, and the Democrat machine just needs to keep him lucid enough during the primary and the subsequent presidential campaign to get him elected.   Granted he seems to be faltering early in the game, but the polls still show him as “numero uno” both over the other Dem hopefuls and Trump.

Dems are on a crusade and like the crusaders of old, they just won’t give up.  There is a strong possibility Joe Biden can squeak by and beat Trump, whose policies unquestionably are great for the country, but whose outrageous tweets and less-than-presidential demeanor put off key constituents needed for election, including white, educated, suburban women.  Unfortunately, Joe—and the Democrat leaders—know, that in the long-term he is not up to the task of running the country and that is why their vice presidential candidate matters!   Because Joe is prepared to fall on his sword (after his election as President), so the DNC’s real choice can take over.  It is important to watch who that selection will be to determine in which direction they really want to take this country!

Will it be angry Stacey Abrams, whose identity politics are polarizing; Elizabeth Warren, who will swing this country ever closer to a socialistic society or Amy Klobuchar, in line with Biden’s more moderate view?  Or someone else waiting in the shadows?

Guess we’ll just have to wait and see!