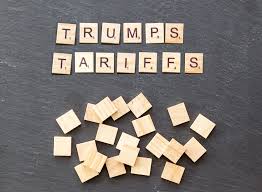 China has proven itself to be an unreliable trade partner in its negotiations, says President Donald Trump, and now he is levying another 10 percent tariff on $300 billion of Chinese goods that were untaxed.

This comes atop the 25 percent tariff on another $250 billion of goods that was hiked in May, which is expected to raise more than $50 billion in revenue this year to the U.S. Treasury.

Trump cited failure by Chinese President Xi Jinping to follow through on commitments he has made, stating on Twitter, “Our representatives have just returned from China where they had constructive talks having to do with a future Trade Deal. We thought we had a deal with China three months ago, but sadly, China decided to re-negotiate the deal prior to signing. More recently, China agreed to… buy agricultural product from the U.S. in large quantities, but did not do so. Additionally, my friend President Xi said that he would stop the sale of Fentanyl to the United States — this never happened, and many Americans continue to die!”

The President still held out hope that a deal could be reached, with the tariffs being a bit of additional incentive, writing, “Trade talks are continuing, and… during the talks the U.S. will start, on September 1st, putting a small additional Tariff of 10% on the remaining 300 Billion Dollars of goods and products coming from China into our Country. This does not include the 250 Billion Dollars already Tariffed at 25%… We look forward to continuing our positive dialogue with China on a comprehensive Trade Deal, and feel that the future between our two countries will be a very bright one!”

The trade deal was said to have been in its final stages, but at the eleventh hour, Beijing changed the terms of the deal and promptly walked back prior concessions. According to a May 8 Reuters report, “In each of the seven chapters of the draft trade deal, China had deleted its commitments to change laws to resolve core complaints that caused the United States to launch a trade war: Theft of U.S. intellectual property and trade secrets; forced technology transfers; competition policy; access to financial services; and currency manipulation.”

Adding to the mix, the trade in goods deficit with China hit a record high in 2018 at $419.1 billion according to the U.S. Census Bureau. And that was with some of the tariffs in place.

Ostensibly, the only reason China had come to the table in the first place was President Trump’s threat of further tariffs and an attempt string along negotiators in the hopes of avoiding them. It appears to have been designed to test Trump, betting that perhaps he would not follow through on the tariffs.

Which, it’s hard to blame China for miscalculating. It’s used to just getting its way with the U.S. without consequence or blowback. Since China entered the World Trade Organization in 2001, U.S. manufacturing market share has dropped from 13.4 percent to 7.5 percent in 2017, according to World Bank data. China has risen from 5.3 percent to 16.6 percent in 2017, although their percent of global manufacturing market share has peaked in 2015 at 18.8 percent. During that time, the U.S. economy has not grown above 4 percent since 2000, and not above 3 percent since 2005 on an annual basis.

What they didn’t plan on was Trump. Now, there’s tariffs on $550 billion of goods. Either way, the decision to end the deal may have been so it could wait Trump out with 2020 right around the corner.  If Trump loses his bid for reelection, their problem is solved.

And Trump may be right.

On June 17, “The Coming Collapse of China” author Gordon Chang on Fox Business reported to host Neil Cavuto, “China right now has an economy which is crumbling, could have been contracting last month. We saw that with bellwether car sales down 16.4 percent, the eleventh straight month of decline, the worst monthly decline eves. And imports were down 8.5 percent year on year, a real indication of declining domestic demand.”

Chang added, “This is an economy that is in severe trouble. They need the U.S. market desperately.”

So, maybe the tariffs are working. In this confrontation, Trump does not need a deal as much as China does, for he can inflict damage merely by encouraging manufacturers to move their business elsewhere, whether back to the U.S. or somewhere else. In “The Art of Deal,” Trump wrote, “Use your leverage.” That’s exactly what he’s doing — and it’s about time.