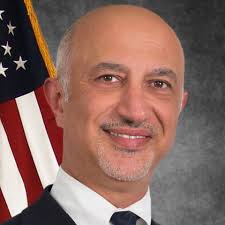 New Jersey’s 5th Congressional District appears to many national political observers to be a Democrat lock at this point, given the massive war chest maintained by two-term incumbent Josh Gottheimer, who presents an image of being a moderate. Not far in the past, however, the district was a long-time Republican stronghold, with the seat being held by a very conservative congressman, Scott Garrett, for 14 years until he lost it in 2016 to Gottheimer.

In 2018, Gottheimer retained his seat, defeating his Republican challenger by getting 56% of the vote. Although the vote differential was somewhat sizable, the gap isn’t such that can’t be filled by a Republican with the right message and background. A fresh face with conservative bonafides and considerable, current political experience is the GOP’s best chance to take back this congressional seat, which covers all of Sussex and Warren counties, as well as a substantial portion of Bergen County and a part of Passaic county.

Enter Mike Ghassali, the Mayor of Montvale, New Jersey, which is at the northern tip of Bergen County, the state’s most affluent county; he announced his candidacy for the 5th Congressional District seat earlier this summer. Ghassali, a Christian born in Syria and who became an American citizen after legally immigrating to the U.S. at 16, has been both a successful entrepreneur and dynamic humanitarian. For the last several years, he has worked for the organization Feed the Children and, with a talented team, has raised hundreds of millions of dollars in gift-in-kind and in cash to help needy families and veterans across the country. Ghassali also is currently a contract language analyst with active security clearance (TS/SCI). The combination of these experiences nets Ghassali a powerful background that demonstrates substantial trust in his judgment (i.e., through the security clearance) and his ability to raise money (i.e., through his humanitarian efforts). These factors, alone, render him a formidable force to take on the fundraising machine and public relations master-broker Josh Gottheimer.

Ghassali’s other professional experiences make him an even more exciting choice for voters in New Jersey’s 5th Congressional District. He is an extremely accomplished, self-made man whose growth came not from inherited wealth or political relationships, but, simply, hard work. Ghassali worked at Unilever in Englewood Cliffs for 15 years, and then started his own supply chain solutions business to consult food companies on shipping best practices to reduce in-transit damages. His company, Damage Research Inc., was sold to GENCO Supply Chain Solutions, which was then acquired by FedEx.  It’s quite a success story for Ghassali that his systems and methodology are being used by Fortune 500 Companies today. Prior business experience included owning several hair salons, which he then sold at cost to his employees.

If all that isn’t enough, Ghassali became the mayor of his hometown, Montvale, after recognizing that a more business-minded and fiscally conservative route was best for the municipality. Ghassali, who is the president of the Pascack Valley Mayors Association, has been noted, statewide, as a mayor with a proven track record in reducing taxes, cutting unnecessary spending, and adding revenue to his community.

A poster boy for the true American Dream, Ghassali draws respect for his legal entry into the United States and thereafter for contributing so importantly to the economic development of his new, home nation, while simultaneously helping so many in need. His story is indeed an inspirational one. And such inspiration is what many voters yearn for, rather than the plastic politicians who, in such great numbers, disgrace the halls of Congress and government bodies throughout the United States. Ghassali’s bold and authentic conservative values are likely to be enticing to New Jersey’s 5th Congressional District, which has more registered Republicans than Democrats.

Ghassali, who has already received endorsements from numerous prominent New Jersey Republicans, is pro-life, and he is unwavering in this moral stance. Following are just some of his other positions – taken directly from his candidate website – on the matters that are most important to Americans and New Jerseyans:

As a responsible gun owner since 1990, he will fight to protect our 2nd Amendment rights, and our liberties.  Mike will oppose any legislation that takes away your right to protect yourself and your loved ones. He will fight to take away guns from criminals and those who want to use guns to cause harm to people.  He believes only responsible, mature and fully vetted people should be allowed to purchase guns.

Americans are struggling to keep up with today’s rising healthcare costs and Congress has failed to act after years of promises. A one-size-fits-all approach with increased government regulation is not the answer.  He believes that we and our doctors should be able to make our healthcare choices, not the insurance companies.

Mike believes that everyone should be treated equally no matter what their background, race, sexual orientation, color, religion, how they speak or how they look.  However, he does not support others forcing their way of life on him and his family, or forcing to agree with them and their way of life.  Government stops at our front door.

There are people who hate our way of life and mean us harm.  There are countries who don’t follow the rules and work hard every day to acquire means to harm our great country and our allies.  Mike is for a strong, well trained and equipped military with the best technology and expertise available in the universe.  He will support all legislations that will help the men and women in uniform and without uniform who ensure our safety every minute of the day, stateside and around the globe.

Stands for controlled borders and strong immigration policies.  Having open borders is a national security risk.  He is proud to always say that he and his family came through the front door, they knocked and this great country opened its doors with all the greatness that it has to offer.  FOLLOW THE PROCESS.  He strongly believes that we need to address the root causes.  Why are people coming here? largely because they don’t have work in their home countries.  He will work to implement commerce solutions in those countries and create jobs.  People don’t really want to leave their homeland unless they are at risk or don’t have jobs to be able to work at and support their families. Mike understand oppression and understands why people want to leave their countries, and he will work hard to implement long term solutions.

The strength in these convictions, no doubt, will resonate with the majority of voters in Ghassali’s congressional district. His personal story, with its authentic American Dream cache, hard work reality, and motivating humanitarian efforts, will surely make him a standout and endearing candidate to the voters. Make no mistake, however, Josh Gottheimer is a powerful force to be reckoned with, and he will not be easy to unseat. Gottheimer, who has a voting record that, of course, is largely in line with the national Democrat platform, doesn’t always vote with all of his Democrat congressional colleagues. Still, he more often votes down party lines and many believe is farther left than portrayed – but he has a boatload of funds to perpetuate his centrist image. He also presents a likeable demeanor, and he has strong ties within the national Democratic party, which does not want to lose this seat. That said, Donald Trump is, well, Donald Trump. He won New Jersey’s 5th Congressional District in 2016, and there is no rational reason to believe that he won’t win it again in 2020. With a true conservative like Ghassali (and all of the inspiration that goes along with his candidacy) running alongside the very popular president, Ghassali is reasonably positioned to reclaim this congressional seat for the Republican Party.