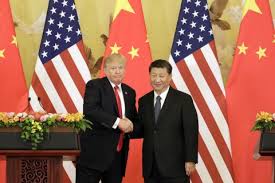 All of those who get worked up over negligible increases in U.S. tariffs on Chinese made goods, please remember this basic fact – China cheats.

China also steals U.S. company’s intellectual property and then sells that innovation around the world for pennies on the dollar.

China then dumps products onto the U.S. market with the intent of driving U.S. manufacturers who are the innovators out of business so they can be sole source providers of critical component parts.  They not only do this directly from China but also utilize other countries as pass-throughs for Chinese originating goods, as well as steel and aluminum products, and this is a big problem for the world.

America’s energy industry is thriving and the President’s stated goal of energy dominance is within sight, but Chinese dumping onto U.S. markets of couplings which hold together sections of drilling pipe threatens everything.  This three year old strategically targeted play by the Chinese to inject themselves into the oil drilling supply chain is having a devastating impact on U.S. coupling manufacturers according to testimony before a May, 2019  U.S. Trade Representative, Section 301, Tariff hearing.

Jimmy Legg, the general manager of LB3 Pipe & Coupling testified that couplings are essential to oil and natural gas extraction and that Chinese originated couplings are being sold at less than the cost to his company for the raw steel. Legg emphasized that you can’t drill for oil without steel couplings and that this dumping of a critical infrastructure product is causing his company to cut back in what should be a time of prosperity, forgoing hiring up to 40 to 50 new people for their manufacturing plant.

Sean Keogh, the operations manager of AmTex Machine Products the largest independent U.S. coupling manufacturer agreed, testifying that his company is operating at 35 percent capacity strictly due to Chinese policies designed to create a pricing disadvantage for his company. But Keough clearly states that the Chinese flooding of the markets with cheap, government subsidized alternatives is not the only threat, as he testified that China also reverse engineers proprietary threads created by his company’s heavy investments in research and development.

In his testimony, Keough explained, “The pipe mills and oil and gas engineers invest heavily in research and development to bring these new technologies to challenging drilling and extraction environments.  We invest to obtain licenses for those patented designs to produce these semi-premium and premium couplings.  Once we obtain the license, we should have the opportunities to sell these couplings globally, but the Chinese have flooded the South American and Middle Eastern markets with their reverse engineered couplings.  As a result, the Chinese government programs are not just impacting their U.S. sales, they are also taking away export markets and our ability to help reduce the U.S. trade deficit.”

In clear, unambiguous terms, Legg and Keough have made it clear that China cheats, both by flooding markets around the world to create market dominance for their companies and drive competitors out of business, but also by stealing technological innovation by U.S. companies that would allow our nation’s manufacturers to win based upon technological superiority.

The Office of the U.S. Trade Representative can and should use its authority to include pipe couplings in with the steel tariffs, but they also should seek all other remedies at their disposal using the International Trade Court.

Most importantly, as President Trump meets his Chinese counterpart, at the G-20 meeting, his team needs to remember that China is strategically seeking to inject itself into America’s critical industries including our vibrant energy extraction sector.  This is not friendly competition of an ally, but rather a planned attack designed to create leverage and potentially cripple critical sectors of our economy.

The President is right to insist upon the ending of China’s currency manipulations, protection of intellectual property rights and the ending of forced technology transfers for U.S. companies seeking to enter the Chinese market.  But it is equally important that he remember President Reagan’s credo when dealing with the former Soviet Union to “trust but verify.”

Given the Chinese history of trade abuse, perhaps this phrase should be altered to “verify and then trust” to force some transparency on the historically opaque Chinese system.