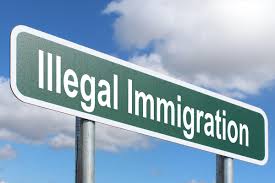 Taking a page from the playbook of Dwight D. Eisenhower, President Donald Trump announced on June 17 that the federal government will be undertaking a massive operation to remove millions of illegal immigrants from the United States. Once derided as impossible by Trump’s opponents, this may be the most major undertaking at deportation in more than 60 years.

On Twitter, Trump wrote, “Next week ICE will begin the process of removing the millions of illegal aliens who have illicitly found their way into the United States. They will be removed as fast as they come in.”

At the moment, the current rate of apprehensions is more than 144,000 a month in May, up from 109,000 in April, 103,000 in March and 76,000 in February, according to data compiled by Customs and Border Patrol. That’s on top of the millions of illegal immigrants already here. So, off the bat, that is hundreds of thousands of removals needed on a monthly basis to keep up with the flow.

The announcement came on the heels of a joint agreement between the U.S. and Mexico to dramatically curb illegal immigration after Trump had threatened Mexico with up to 25 percent tariffs on goods by October if no deal was made. Per the agreement’s text courtesy of the U.S. State Department, “Mexico will take unprecedented steps to increase enforcement to curb irregular migration, to include the deployment of its National Guard throughout Mexico, giving priority to its southern border. Mexico is also taking decisive action to dismantle human smuggling and trafficking organizations as well as their illicit financial and transportation networks.”

In addition, the U.S. will be expanding the Migrant Protection Protocols, per the agreement, “those crossing the U.S. Southern Border to seek asylum will be rapidly returned to Mexico where they may await the adjudication of their asylum claims… [And,] Mexico will authorize the entrance of all of those individuals for humanitarian reasons, in compliance with its international obligations, while they await the adjudication of their asylum claims.”

Trump praised Mexico in his tweet, writing, “Mexico, using their strong immigration laws, is doing a very good job of stopping people… long before they get to our Southern Border.”

The overall program of mass deportation was once said to be impossible by Trump’s opponents in the 2016 GOP primary. One of those skeptics was former Florida Governor Jeb Bush. At the Fox Business-Wall Street Journal Republican Presidential Debate in Milwaukee, Wis. on Nov. 10, 2015, Bush expressed his skepticism, saying, “12 million illegal immigrants, to send them back, 500,000 a month, is just not — not possible.”

Bush was responding to Trump’s call for the deportation of millions of illegal immigrants at the debate, when he cited the Eisenhower program: “Let me just tell you that Dwight Eisenhower, good president, great president, people liked him. ‘I like Ike,’ right? The expression. ‘I like Ike.’ Moved 1.5 million illegal immigrants out of this country…”

Now, it looks like Trump is actually moving forward with the plan, which harkens back to the 1954 Eisenhower deportation program in Border States, which came after more than a million estimated migrant workers had crossed into the U.S. illegally in the prior decade as illegal immigration exploded under the U.S.-Mexico Bracero guest worker program.

The deportation program appears to have been designed to scare people away, notes the Texas State Historical Association (TSHA) in a 2010 article by Fred L. Koestler: “The forces used by the government were actually relatively small, perhaps no more than 700 men, but were exaggerated by border patrol officials who hoped to scare unauthorized workers into flight back to Mexico. Valley newspapers also exaggerated the size of the government forces for their own purposes: generally unfavorable editorials attacked the Border Patrol as an invading army seeking to deprive Valley farmers of their inexpensive labor force.”

As for the number actually deported by the government in the operation, the Immigration and Naturalization Service (INS) reported a little more than 80,000 apprehensions in all of Texas outside of El Paso and the Trans-Pecos. But, notes the TSHA article, “It is difficult to estimate the number of people forced to leave by the operation. The INS claimed as many as 1,300,000, though the number officially apprehended did not come anywhere near this total. The INS estimate rested on the claim that most undocumented immigrants, fearing apprehension by the government, had voluntarily repatriated themselves before and during the operation.”

The same thing might be happening here with the Trump plan, where a major crackdown on both sides of the U.S.-Mexico border may result in more self-deportations. There is some evidence, with the number of voluntary departures accelerating in the first two years of President Trump’s term, according Justice Department data compiled by the Marshall Project and Github. The number of voluntary departures hit 29,818 in 2018, up from 13,898 in 2017 and 8,556 in 2016.

A piece from Politico in May certainly highlights the advantage of illegal immigrants leaving voluntarily, “Under immigration law, voluntary departure is considered a kind of privilege. If you are deported, you have to wait years to apply for a visa to reenter the United States, but those who leave voluntarily don’t have the same wait.” Now, with the odds of deportation rising under Trump, many are choosing to leave before they are removed.

Overall, time will tell if the current crackdown is effective as the administration monitors the numbers of individuals making it across the border and how many apprehensions from Customs and Border Patrol occur as the new U.S.-Mexico agreement is enforced. But like Ike, Trump is giving it a shot and fulfilling his promise to get the border under control. It’s certainly more than his opponents would have done.