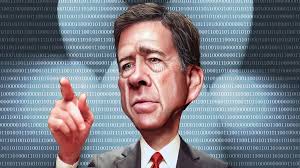 James Comey appeared recently on a CNN Town Hall hosted by Anderson Cooper.  Anderson was once a respected journalist who reported from hot zones throughout the world.  However, he has succumbed to CNN’s “lemonade,” and has been reduced to interviewing the “flavors” of the day, who eventually fall into irrelevance or worse.   Comey’s impressive height may lend itself to the impression of a lofty nature, but his godlike demeanor belies a narcissistic personality that apparently prevents him from accepting the fact that he was fired as Director of the F.B.I.    Why CNN decided to provide this disgraced individual with any venue, let alone not one, but two town halls, can possibly be explained by the bottom line and their plummeting ratings.  Unfortunately, improved ratings did not pan out, with 1.6 million viewers watching the town hall, while 2.9 million watched Fox cable network shows airing during the same time slots.

During the recent town hall, Anderson sat appropriately enraptured; hanging on Comey’s every word, much the same as he did with the Avenatti interview.  Michael Avenatti is an attorney whose original claim to fame was representing Stormy Daniel, a porn star and stripper, who was suing President Trump.  Avenatti was interviewed over 100 times on CNN and MSNBC during a 10-week period in 2018.  During his interview with Anderson, he confirmed the accuracy of his information related to Trump’s collusion with the Russians during Trump’s campaign for the 2016 presidency.  He was CNN’s major celebrity…until  his federal grand jury indictment on 36 counts, including embezzlement, wire fraud, tax evasion, bankruptcy fraud and bank fraud.  Oh, and the Mueller Report exonerated Trump from collusion with the Russians.

As CNN’s celeb du jour,  Comey asserted to Anderson and the audience at the town hall that Attorney General William Barr had wrecked his reputation;  Rod Rosenstein, Assistant Attorney General, was of weak character and President Trump appeared to have obstructed justice.  Meanwhile, at the Justice Department, the Inspector General, Michael Horowitz, is investigating the sources and methods used by the FBI to initiate the surveillance of the Trump campaign.   And who was in charge of the F.B.I. at that time—none other than James Comey.   Are the CNN Avenatti interviews and his current status with the Feds a harbinger of what Mr. Comey’s future might portend?  Let the interviewee beware!