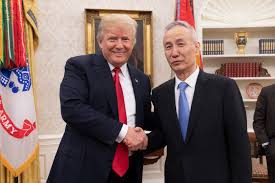 On May 10, the South China Morning Post published a report, “Will China use its US$1.2 trillion of US debt as firepower to fight the trade war?” speculating that China might have potential leverage against the U.S. after President Donald Trump levied 25 percent tariffs on a total of now $250 billion of Chinese goods.

But that’s all it is: speculation. Nothing more. China is in no danger of dumping its treasuries holdings, and even if it were, it would gain no trade advantage from doing so. Why, you ask?

Because they’re a paper dragon.

For starters, if you look at the $16.2 trillion public treasuries market (excluding the $5.8 trillion the U.S. government holds), China has about $1.13 trillion of that, or about 7 percent of the total.

The South China Morning Post’s Karen Yeung  warns, “China could strike back by dumping its vast holdings of US government debt. Flooding the market with Treasuries would push down U.S. bond prices and cause the yields to spike. That would make it more costly for US companies and consumers to borrow, in turn depressing America’s economic growth.”

So, if Beijing were to start dumping treasuries, flooding the open market, interest rates for the bonds they were dumping might increase, but just temporarily, because to sell they’d have to have willing buyers.

And right now, there are plenty of those. In fact, fearful of the breakdown of trade talks with the U.S. by China, investors are fleeing equities and buying none other than U.S. treasuries, which is driving down interest rates.

In addition, one must also factor in potential actions by central banks to perhaps purchase any bonds that were being dumped even if treasuries markets could not fully absorb the temporary glut.

In that context, both markets and the Federal Reserve (and allied central banks in the UK, Japan and elsewhere) would likely be able to smooth over any impact of China or anyone else dumping bonds.

So, kind of like Daffy Duck eating the gunpowder and swallowing the match, it’s a neat trick, but China will only be able to do it once.

Moreover, dumping treasuries would actually erase China’s ability to use treasuries purchases to manipulate exchange rates. The way that works is not by dumping treasuries, but buying dollars and dumping their own currency in bulk (usually with a horde of foreign exchange reserves), and using the dollars to purchase treasuries. The manipulating country issue domestic securities or raise interest rates during this process to domestic inflation. This makes the country’s exports to the U.S. cheaper, and helps boost global market share.

On our side, it acts as a tariff, since it increases the price of China’s imports when it does this. Yes, big purchases of treasuries do tend to push interest rates for our bonds down, and with lower interest rates, the dollar tends to be cheaper on a price basis, because of the manipulation, relative to the yuan it remains more expensive after this process.

Here, China has an additional advantage in this regard with its ability to set the fixed exchange rate. So, when it wants to manipulate it can devalue the yuan, buy dollars with it and buy treasuries with those, and repeat the cycle.

It’s quite ingenious and is one of the reasons why China and other exporters have such large sums of treasuries to date. Again, it makes its exports to the U.S. cheaper, and just one more non-tariff barrier that makes it more difficult for the U.S. to ship goods there, since the process also makes imports more expensive.

That is why President Donald Trump should not only tell China to “bring it on” when it comes to dumping treasuries, he might also consider having the U.S. Treasury label China a currency manipulator and bar it from purchasing any more treasuries.

After all, China needs to keep buying treasuries to exert its trade advantage. Without treasuries to fall back on, the yuan could appreciate vis a vis the dollar, even with the fixed exchange rate.

Dumping treasuries is often viewed as a potential retaliatory move by China, but the only way it might hurt would be if doing so would set off a sovereign debt style crisis with high interest rates and low demand. But that is extremely unlikely to occur, even if the initial aftermath was painful.

Even without China, U.S. paper is still very much in demand. What China would lose in the process would be its manufacturing market share to other countries that could use the new available stockpile of treasuries on the market to devalue their own currencies, and compete with China for goods shipments to the U.S.

In other words, markets are resilient and should be more than able to offset any interest rate impact on China dumping treasuries and, in the meantime, Beijing would gain no advantage in doing so. It’s not leverage, it’s suicide. They can stop buying paper, or we could block them from buying more paper. We don’t need China to buy U.S. debt. Someone else will. It’s no skin off our nose.