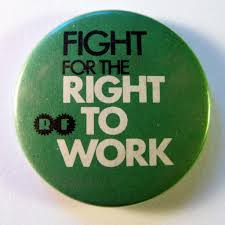 What are the “right to work” laws and are they the same as the “at will” doctrine?  Many use these two terms interchangeably; however, they are not the same.

The “at will” doctrine is universally recognized throughout the United States, whereas “right to work” laws have been passed in 28 states—includes West Virginia which is pending until reviewed by the state’s supreme court.  The “right to work” laws relate to employee rights during their employment in a unionized environment; the “at will” doctrine refers to the employer/employee relationship affecting the termination process.

“At will” employment is where there is no formal written contract between the employer and the employee.  According to an article written by Charles Muhl in the January 2001 issue of the Monthly Labor Review, published by the U. S Bureau of Labor Statistics, “that if an employee doesn’t have a written contract with specific time duration, the employer can terminate the employee for good cause, bad cause and no cause at all.”  At first blush it would appear that there is no job security as a result of the “at will” doctrine; however, many states offer legal recourse for employees to fight unjustified terminations.  These states, along with Federal laws, place limitations to the “at will” doctrine.  These exceptions are based on public policy requirements (8 states currently do not recognize this exception); implied contract where the employee has signed an at will employment contract which might include contractual language or statements in a handbook indicating termination for good cause (13 states do not recognize this exception) and good faith.  This is the broadest in application but the narrowest in acceptance since only 11 states recognize this exception.

The “right to work” laws are much more politically charged issues since they permit employees to   work in an organization that is unionized without having to join the union or pay union dues.  It originated in 1935 with the National Labor Relations Act providing employees options to participating in unionization and The Taft Hartley Act of 1947, which gave the states the ability to pass “the right to work” laws.  If an employee is not in a “right to work” state, they might not be hired if they refuse to join the union.   Union leaders oppose the “right to work” laws since they feel these laws inhibit their bargaining power.  As a result, it has been added to the 2020 Democrat presidential candidates’ bully pulpit as they push to go backwards in time before 1947.

States with “right to work” laws have experienced significant job growth.  During the period 2001 – 2016 job growth has been approximately twice as great as states without such laws—27% as compared to 15%–in tandem with significant wage growth and economic output.  All else equal, business owners prefer to locate in these states and domestic population moves during this decade consistently have been to “right to work” states.  Given the opportunity, more and more employees are declining to join unions or to leave unions.  As a result of former Governor Scott Walker’s efforts to bring right to work reforms to Wisconsin, in Madison, WI, the bastion of progressive liberalism, 2017 stats show that the union membership rate fell to 5.4%.  Statewide membership between 2010 and 2016 has shown a decline of 38.5% in union membership.  The U.S. Department of Labor 2018 Annual Report shows a continued long-term downward trend nationwide in union membership while the number of jobs has been increasing across the country, along with household income.   Interestingly enough, despite the decline nationwide, Pennsylvania experienced an increase from 12% in 2017 to 12.6% in 2018.  No wonder Biden decided to hold his opening rally there!

Going against the tide, the Democrats in Congress are preparing a bill outlawing “right to work” laws and Kamala Harris is leading the pack of Dem presidential hopefuls in declaring her support for ridding the country of laws that employers and employees alike are in favor of keeping.   Why is this?  Because Big Labor bosses have Democrats in their hip pocket!   However, with the Supreme Court ruling in 2018 known as the Janus decision ending compelled union dues for public employees,  it is highly unlikely that that the Dems can prevail any time soon.