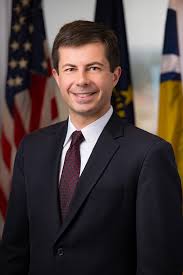 Who is Mayor Pete?  He is Pete Buttigieg, a veteran of Afghanistan, a Rhodes scholar, graduate of Harvard and currently Mayor of South Bend, Indiana.  He is affable, well spoken, a progressive Democrat without being in your face.  He is also openly gay and married to another male, Chasten Glizman, a junior high school teacher.  At age 37, he is the youngest individual running for the 2020 presidency and currently rated third at 15% in the Democrat primary race.

In addition to the above-mentioned credentials, let’s take a look at the City he has governed since 2012.  According to the website, “Best Places,” the unemployment rate for South Bend is 4% vs. U.S. average of 3.9%; household income of $37,441 vs. U.S. average of $57,652 and family median income of $45,699 vs. U.S. average of $70,850.    The reviews from residents of South Bend about their town range from “Pete’s Land of Oz, with arrogant politics and the tearing down of neighborhood homes to clean things up” to lamenting “murder and mayhem” to “it’s a great place to live with a lot more to offer than meets the eye.”  Best Places rates it 3 out of 5 stars.

Does an openly gay man stand a chance of being elected president?  According to a Pew Research Center report, 70% of Americans are accepting of homosexuality with 62% in support of gay marriages.  Age correlates with acceptance of homosexuality—83%, ages 18 to 29; 72%, 30-49; 65%, 50-64; and 58%, 65 and older.  Education also plays a role—81% of individuals with postgraduate degrees support homosexuality; 77% with bachelor degrees; 69% with some college and 64% with no college.  However, this does not necessarily translate into electability to the highest office in the land.  President Kennedy was elected in 1960, 110 years after the wave of Irish immigrants during the Potato Famine and the discrimination against them which followed and President Obama was elected in 2008, approximately 160 years after the end of slavery.

It has only been about 50 years since the Stonewall Riots on 6/28/1969, when New York City police raided the Stonewall Inn in Greenwich Village, a gay bar, and a 6-day riot ensued.  This violent clash  between the gay community and its supporters and the police was the catalyst for the gay rights movement in the U.S. and throughout the world.  So does this mean that an openly gay or lesbian will have to wait another 50+ years before being elected president?  Neither group has yet to be elected to a governorship or to the U.S. Senate (although individuals might have come out after being elected), so it may not be an easy jump from mayor to president.  However, if he is able to make that leap, Mayor Pete would probably not be the first gay president.  Although undeclared, President Buchanan, a bachelor, was suspected of having a relationship with President Franklin’s Vice President, William Rufus King.

The number of Democrat candidates running in the primary seems to increase daily.  It is anticipated that Joe Biden will throw in his hat this Wednesday, bringing the total to 20.  It is early days still for the young, gay man from South Bend!