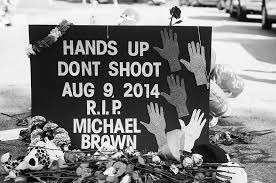 There are people who come into the public’s attention from time-to-time that might make you reflect after the fact, where are they now?

On August 9, 2014, in a small town, Ferguson, Missouri, a killing of a black teenager spotlighted the town and ignited it literally, sparking a debate over perceived police brutality and racism, as well as highlighting the liberal media’s bias against law enforcement.

After the town burned and the smoke cleared, it was determined that Michael Brown, an 18-year black man, was shot in self-defense while assaulting a 28-year old police officer, Darren Wilson.  Contrary to initial reports, Brown was not shot as he got on his knees, held up his arms in surrender and shouted “Don’t shoot me.”  Rather, he attacked the police officer, trying to wrest the officer’s gun from him and was subsequently shot during this encounter.  Wilson failed to be indicted by the St. Louis County Grand Jury and was cleared by the Department of Justice for civil rights violations, with forensics and witnesses supporting the officer’s account of the incident.

Michal Brown was depicted by a liberal press as a “gentle giant” and this was at least partially correct.  He was a 6’4”, nearly 300 lb. bully who intimated a store clerk, which was caught on video as he was robbing the convenience store.  His death, nonetheless, resulted in massive rioting in Ferguson, with his stepfather encouraging the crowds to burn “the mother f____er down,” causing injuries to 14 people and 12 buildings burning to the ground.

And what was the outcome—mob rule prevails.  Instead of compensating Darren Wilson, who did his duty and was punished for it by unemployment and media condemnation, the City of Ferguson chose to award Michael’s parents, Michael Brown, Sr. and Lezley McSpadden $1.5 million as a result of a suit they were bringing against the City of Ferguson for wrongful death.  In addition, the suit claimed that it deprived them (the parents) of financial support from their son through loss of his potential earnings.  Really, how many parents out there are being supported by their children?  This never went to trial, but resulted in a quiet settlement, splitting the $1.5 million between the parents, thus setting a precedent that criminals are victims and their families should be rewarded.

Where are these two now?  Enjoying the good life?  Like the Beverly Hillbillies they stroke oil, but at an enormous price, both personally and to the citizens of Ferguson and beyond.  If you search the web, they disappear from the news after being awarded the spoils of a mob war. The liberal media has moved on to greener pastures, which like Ferguson, will end up burning and fading away after they have marched  on through.

“ONLY IN AMERICA—LAND OF OPPORTUNITY! “