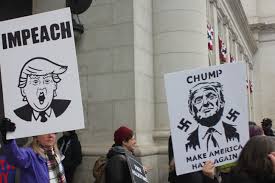 “We do not now have the evidence all sorted out and everything to do an impeachment.”

That was House Judiciary Committee Jerry Nadler (D-N.Y.) with ABC News’ George Stephanopoulos on March 3 that the House is not ready to impeach President Donald Trump because the evidentiary predicate has not yet been laid.

Predetermined outcome, anyone? Nadler admits he does not have the evidence, but has already decided that Trump is guilty of obstruction.

The American people should consider this the opening bid by Nadler to get at information currently in the possession of Mueller, including his final report, which is now expected any day to be delivered to Attorney General William Barr — and which Nadler and Congressional Democrats hope will implicate Trump in something. But it might not. So, he needs to lay the predicate for his own investigation to continue after Mueller is done.

Nadler went on to lay out the necessary political predicate for impeachment as well, stating, “Before you impeach somebody, you have to persuade them that it ought to happen. You have to persuade enough of the opposition party voters, so the Trump voters, that you’re not just trying… to steal the last election, to reverse the results.”

Nadler added, “We may or may not get there.”

Here, Nadler is acknowledging that he presently lacks the necessary evidence to impeach Trump, despite the fact that many of the things he has mentioned are already in the public record. James Comey has already testified about his conversations with President Trump. So has Michael Cohen.

When President Trump fired Comey, he reportedly, according to former Deputy Director of the FBI Andrew McCabe, told Deputy Attorney General Rod Rosenstein to include Comey’s conduct in the Russia investigation in the justification, but Rosenstein supposedly refused, and so the President included it in his own justification for firing Comey in his cover letter, writing, “While I appreciate you informing me, on three separate occasions, that I am not under investigation, I nevertheless concur with the judgment of the Department of Justice that you are not able to effectively lead the Bureau.”

Here, in firing Comey, Trump appears to have been blasting him for lying to his face about the extent of the Russia investigation, which really was always an investigation into Trump in 2016 and then in 2017 after he was inaugurated. Trump had been elected as President to head the executive branch, yet by then, his campaign was already under Justice Department investigation and being surveilled using Foreign Intelligence Surveillance Act (FISA) warrants allegedly for coordinating the DNC and John Podesta hacks that appeared on Wikileaks, for which no evidence has ever been furnished. They thought he was a Russian agent. Still think it. Nobody in the Trump campaign was ever charged with the hacks or distributing emails to Wikileaks.

When Trump found out Comey was lying about the extent of the investigation, and that the spying had been carried over into the new administration, Comey was fired. Trump was investigating what happened, and Comey lied to the investigator. Comey should have been fired. It was a rogue operation. Trump oversees the executive branch. He is the one person elected to do that. It’s his business to conduct political oversight of the Justice Department and the Attorney General and the FBI Director, and if he is not happy with how the laws are being enforced, he can and should get new Attorneys General and FBI Directors.

Under Article II, Section 1 of the Constitution, it clearly states “The executive power shall be vested in a president of the United States of America.”

As the President, Trump is obviously in a unique position to know whether or not he is a Russian agent. Giving him the benefit of the doubt for a moment, let’s say he wasn’t, and then he learns of an FBI investigation attempting to frame him for those crimes. His Attorney General had been pressured into being recused, cutting off the President. What was he supposed to do?

Apparently, in official Washington, D.C. you’re just supposed to let it all play out. Act like you’re not the President charged with enforcing the laws. Ignore the fact that the investigation began as opposition research by the Hillary Clinton campaign, the dossier by ex-British spy Christopher Steele, and then the Obama administration using it to spy on the opposition party in an election year.  And then just wait for the erroneous, malicious investigation to conclude and hope you’re not brought before a kangaroo court for crimes you know you did not commit — and which were concocted by your political opponents.

Exercising presidential powers to end a fraudulent investigation is not obstruction, Mueller’s charges of process crimes after the fact notwithstanding.

A president is not meant to operate under these circumstances, but yet what you had were two administrations. The duly elected President in Trump, the legitimate government, and this unelected Justice Department investigation whose legitimacy was only ever owed to former President Barack Obama and former Attorney General Loretta Lynch — and whatever legitimacy it had ceased when they left office.

It should have ended the moment Trump came into office, but it didn’t.

If this was not unconstitutional, what is?

In the Federalist No. 70, Alexander Hamilton argued that we only have one president at a time for very good reason, writing, “Wherever two or more persons are engaged in any common enterprise or pursuit, there is always danger of difference of opinion. If it be a public trust or office, in which they are clothed with equal dignity and authority, there is peculiar danger of personal emulation and even animosity. From either, and especially from all these causes, the most bitter dissensions are apt to spring.”

Leading to what? Hamilton warned, “Whenever these happen, they lessen the respectability, weaken the authority, and distract the plans and operation of those whom they divide. If they should unfortunately assail the supreme executive magistracy of a country, consisting of a plurality of persons, they might impede or frustrate the most important measures of the government, in the most critical emergencies of the state. And what is still worse, they might split the community into the most violent and irreconcilable factions, adhering differently to the different individuals who composed the magistracy.”

In short, in its worst instance, dividing the executive power in this manner can lead to factions and civil war. It’s dangerous.

Now there remain two factions in what is supposed to be a unitary executive branch, for two years almost. When presidents are sworn into office, they take the following oath, “I do solemnly swear that I will faithfully execute the office of President of the United States, and will to the best of my ability, preserve, protect, and defend the Constitution of the United States.”

When Trump came into office in 2017, he was already under investigation, apparently for crimes he did not commit, and arguably was left with very bad options with how to function while preserving the Constitution from a rogue administration of law. How does allowing a legal coup occurring on your watch preserve, protect and defend the Constitution?

This was an untenable, unbelievable abuse of power.

The FBI Director was lying to the one person who was elected to oversee the administration of justice when asked about the investigation repeatedly, and in the meantime was telling Congress something else entirely about that investigation. This is the constitutional mess that now Trump and Attorney General William Barr must clean up — so that this never happens again. It won’t be easy. This may very well have caused irreparable damage to our delicate constitutional system. It creates a terrible precedent where outgoing presidents can order investigations into incoming presidents to knee-cap them on the way into office.

In the meantime, Congress will play politics with the outcome of Mueller’s report, even if and when it confirms that there was no conspiracy between the Trump campaign and Russia to hack the DNC and John Podesta.

Per Nadler, Trump firing Comey or even Attorney General Jeff Sessions, to restore the unitary administration of law by the executive branch under the Constitution — and end a politically motivated, malicious investigation — is said to be obstruction of justice. Apparently if Barr moves to clean up the mess, that will be obstruction, too. It never ends. We’ll have breathless hearings for the next 19 months on this.