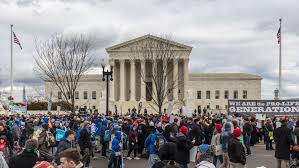 The liberal media and social media’s hostility toward conservatives has once again been on full display this past week. Last Friday, a diverse group of hundreds of thousands of pro-lifers from across the country braved the chilly weather to attend the 46th Annual March for Life in Washington, D.C. Even though Vice President Pence spoke and President Trump appeared via video, the liberal media barely covered the event.

The following day, the liberal Women’s March took place in D.C. Although it drew a significantly smaller crowd, the media spent much more time covering it.

But by Saturday, the liberal media had finally found a story relating to the March for Life that they wanted to cover. Supposedly, some Catholic high schoolers from Kentucky, who had participated in the pro-life march, harassed and disrespected a Native American.

Of course, the liberal media neglected to mention some relevant facts about the incident. For example, a couple of racist Black Hebrew Israelite members harassed and repeatedly insulted the Covington Catholic High School students, some of whom were wearing red Trump hats, for over an hour as they waited by the Lincoln Memorial for their buses to arrive. Alternately, the members warned of impending judgment, urged repentance, read Bible passages, cursed, insulted, and threatened people, not only the teenagers. These men appear to hate virtually everything and everyone, including gays, whites, Trump supporters, the Catholic Church, and America; as if that is not enough, they also have little respect for women.

After the kids began performing some school cheers to drown out the hecklers, Nathan Phillips marched up to the boys while banging on a drum. Phillips, a liberal Native American activist, continued drumming without offering any explanation of what he was doing. The students danced to Phillips’ drumbeat and sang along with the Native Americans accompanying him; Phillips and his group left after only a few minutes.

Through it all, the students largely kept their distance from the foul-mouthed troublemakers, and the kids’ restraint was admirable given the harassment they endured. For the record, adults subjected to the group’s rants are not always so patient, as video of the incident shows.

Unfortunately, these students’ ordeal is not over yet. Unhappy that their smear of these boys has not worked out quite as well as they had hoped, the liberal media is trying again. This time, they are claiming boys from the school have previously worn blackface. There is no evidence of this. What is true is that students have dressed in blue, white, and black to show their school spirit, and some have painted themselves in these colors for games.

Social media, particularly Twitter, also played a role in creating the firestorm these kids are enduring. A Twitter account spread misleading video of the incident, and that tweet was amplified by a network of fake accounts. The original account has been suspended, but that will have no noticeable effect. The next time the left wishes to smear conservatives, they can just use a different account. Even now, Twitter is allowing social justice warriors to bully these kids and their parents. As a result of threats, the Catholic school was closed on Tuesday.

Richard McCarty is the Director of Research at American for Limited Government Foundation.  You can read more of his articles at www.dailytorch.com.