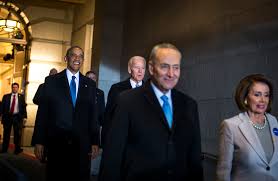 In his national address on Jan. 8, President Donald Trump made the case that the cost of not building the southern border wall will be the human lives lost by not stemming the flow of illegal immigration and the crime that is brought as a result.

“In the last two years, ICE officers made 266,000 arrests of aliens with criminal records, including those charged or convicted of 100,000 assaults, 30,000 sex crimes, and 4,000 violent killings.  Over the years, thousands of Americans have been brutally killed by those who illegally entered our country, and thousands more lives will be lost if we don’t act right now,” Trump said.

In contrast, House Speaker Nancy Pelosi (D-Calif.) and Senate Minority Leader Chuck Schumer (D-N.Y.) in their response portrayed the partial government shutdown in human terms, too — but ones about the affected government workers, of which there are about 800,000, some working, some furloughed and all without pay.

“President Trump has chosen to hold hostage critical services for the health, safety and well-being of the American people and withhold the paychecks of 800,000 innocent workers across the nation,” said Pelosi.

Schumer for his part made a similar appeal, stating, “There is no excuse for hurting millions of Americans over a policy difference. Federal workers are about to miss a paycheck. Some families can’t get a mortgage to buy a new home. Farmers and small businesses won’t get loans they desperately need.”

So, the choice as presented to the American people by our leaders was rather simple. Either, save lives by stemming the flow of illegal immigration through enhanced border security and reopening the government once Democrats agree to this concession, or sacrifice more lives so the federal workers can get paid now.

In short, Pelosi and Schumer want the American people to choose paying the federal government workers not to keep them safe. It doesn’t seem like much of a choice.

Other than lighter traffic, most Americans so far have largely been unaffected by the government shutdown. Mail continues to be delivered. You can still apply to get passports. Social Security, Medicare and Medicaid continue to pay out. Food stamps will continue to be issued through at least the end of February.

The ones on the hook at the moment are those federal workers who are not getting paid. It undoubtedly is a hardship, not knowing where to get the money for the mortgage or to pay the utility bills. But as much as a hardship as losing your spouse or your child to hands of somebody who should have never been here in the first place?

In a humanitarian sense, the choice seems easy.

We pay the federal employees and fully build the wall so that the tide of illegal immigration is stemmed and that sort of thing doesn’t happen again. Yet, for Pelosi and Schumer, the only choice allowed is binary. Either don’t pay and the federal employees will lose their pay, or don’t build the wall and other Americans will lose their lives — but they don’t care, not even if building the wall would save a single life.

In the process, the Democratic leaders present the limits of their power to affect the situation. It also demonstrates the limits politically of the untenable position they have constructed for themselves.

Rather than meet the President halfway over a year ago when former House Judiciary Committee Chairman Bob Goodlatte (R-Va.) offered a compromise immigration reform bill, Democrats and several Republicans, too — who don’t get off the hook for standing in the way — every proposal by the Trump administration on immigration has hit a brick wall in Congress, pun intended.

The Goodlatte bill would have ended chain migration, ended the visa lottery, built the southern border wall where needed, defunded sanctuary cities and implemented a national E-Verify system. It even included legal status for those who were granted DACA with no fast track to a green card, the parents of citizens being granted renewable temporary visas and a guest worker program for agricultural workers. It would have instituted a merit-based approach to immigration by boosting the number of visas for skilled workers.

Addressing overall immigration is definitely worth looking into, and tells the tale that current immigration policy is driven not by merit but by geographic proximity and familial relations, and favoring particularly one country, Mexico, not the needs of the economy.

According to Department of Homeland Security data, from 1986 to 2015, the U.S. has taken in 29 million immigrants. 6 million or more than 20 percent were from Mexico alone. A country that comprises less than 2 percent of the world’s population made up more than one-fifth of all U.S. immigration. Nearly all of that was the 1986 amnesty and then the family-based preferences for those who received the amnesty.

Because of the 1986 amnesty plus chain migration, the Mexican share of overall immigration rose from 11 percent in 1986 to 51 percent by 1991 before tailing down again. In 2015, 15 percent of all immigrants were from Mexico alone. 96 percent of Mexican immigrants are family preferences for either U.S. citizens or lawful permanent residents. Hardly any of the employment visas go to Mexicans, with just 1,200 on the 107,000 waiting list, just 1 percent, whereas there are 1.3 million Mexicans on the family waiting list out of 4.3 million, more than 30 percent.

The Goodlatte bill would have addressed and reformed that broken system. So, it’s not even a situation where simply border security could be addressed. The President has gone out of his way to offer his version of comprehensive immigration proposals. The one thing he absolutely says he needs is the wall, which is why the government is now shut down.

But Pelosi and Schumer cannot even bring themselves to offer a deal that includes the wall, even if they wanted other concessions in return. They are the ones without a policy. The only reform they support is full amnesty and open borders. But that is no compromise. It is a surrender of sovereignty. In the process, they are arguably putting more lives in danger. To them, simply keeping the government open and pretending there is no problem or crisis with illegal immigration is the only choice worth considering. This problem could be fixed, with their help, but they want nothing to do with it. Which, to quote the President, is “so sad.”