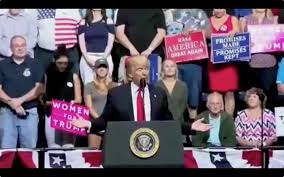 More than 100,000 Texans RSVP’d for tickets for the Donald Trump-Ted Cruz rally in Houston, with thousands waiting in line for a day to get inside the venue. While the arena held about 18,000, a similar number tailgated outside, viewing the rally on big screens much like big sporting event viewing parties held outside of stadiums to accommodate fans without tickets.

Senator Cruz’ opponent, Representative Robert O’Rourke, was praying for a typical low mid-term turnout to help him upset conservative icon Cruz.  His hopes rested on the hope that the dual factors of Cruz’ outside the establishment fights on Obamacare and other issues along with the bitter Trump-Cruz presidential primary fight would create enough divisions that GOP turnout would be low, allowing him to sneak into the Senate seat.

The President and Senator Cruz on stage together puts an end to this dream, as it signals the uniting of the limited government Republican Party that Cruz champions and the populist agenda espoused by Trump.

What’s more, for the first time since Ronald Reagan, a GOP President is able to campaign for and help Republican members of Congress in off-year elections.  While George W. Bush and his father were both able to raise significant money behind closed doors for their supporters in Congress, Trump brings a mass appeal unseen since the 80s.

While some might want to dismiss the 100,000 plus in Houston as being a Texas phenomenon, Trump has been playing to sellout crowds across the country in Minnesota, Pennsylvania, Montana, North Dakota, West Virginia, Ohio and Missouri personally creating the groundswell for a Republican wave that may wipe out Chuck Schumer and Nancy Pelosi’s hopes of a Democrat congressional majority.

Off year elections are supposed to be bad-times for the White House incumbent’s political party, but Donald Trump is a rule breaker, and the Senate election map provides Senate Republicans a pathway to potentially reach the 60 Senator filibuster-proof threshold.

While two weeks is a lifetime in election time, the President is proving to be the symbol the silent majority in America needed of standing up for our nation against the mob that seeks to destroy it.  While others have called President Trump a divider, the great irony is that his standing against the violent Antifa-types has unified not only Republicans but many others who were turned off by both the hippie-left and the effete GOP establishment.

100,000 Texans are the beginning of a new, emboldened conservative, populist wave built on basic security and economic issues and a determination to protect the interests of all Americans over the establishment left and the mobs that front for them.

If this Trump wave continues, when historians review the election results in 2018, it is likely that they will be examining how the Democrats turned almost certain victory into a stunning defeat simply by overplaying their hands and highlighting their intolerance toward opposing points of view.  If any major Democrat had vocally opposed the mobs surrounding the Supreme Court confirmation of Brett Kavanaugh, they might have found sympathy, but rather than showing courage against their own base, national Democrats and those running for election in middle America embraced crazy.

In doing so, they nationalized the election for the rest of America and created their own face.  A face of hatred their allies in the media were not smart enough to conceal.  Ultimately, if a red wave occurs, the Democrats will have to come to grips with the fact that when their true face was revealed, America rejected it.

And for Donald Trump, he will have a Congress which credits him with their majority giving him the legislative clout that he has lacked during his first two-years in office.

November 6, 2018 will determine the face of America. And at least 100,000 Texans are standing up and saying yes to Making America Great Again. The question is whether the rest of America will join them?

Correction: 100,000 Texans requested tickets for the event, while about 35,000 attended inside and out. The piece has been modified to reflect the reported attendance.