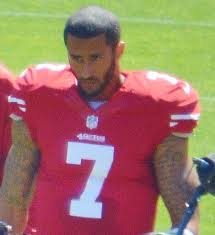 Perhaps the NFL owners are colluding with Russia to keep Colin Kaepernick out of the NFL. If so, they must not understand how to carry out a true conspiracy because they forgot to block the other several dozen players who have committed the same kneeling antics.

Or maybe Kaepernick isn’t in the NFL because his talent, at this point, is inadequate?

Nike’s use of a below average QB as its front man is not perplexing. It’s simply a publicity stunt decision where their internal actuaries have failed. For the same reasons that the NFL haven’t gained a single fan via the national anthem snub (instead losing many), Nike will lose many customers while adding zero more.

If Nike’s goal was to promote so-called social justice, maybe they should close down all of their foreign sweat shops and open factories in inner cities of the United States. If the company obtains such business rationale, then they should continue down the path of logic and replace Kaepernick with Aaron Judge (they need a judge).