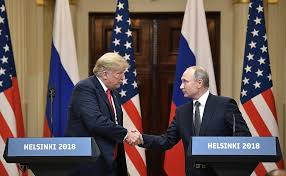 Ever since President Trump’s July 16 summit and press conference with Russian President Vladimir Putin in Helsinki, the Democrats (and some establishment Republicans) have been nothing short of hysterical in their cries of treason, betrayal, and doom for America. As they scream and lament that America is headed toward destruction simply because Trump displayed levelheadedness and rational reasoning in his comments at the press conference, they are overlooking the fact that he has asked a very logical question: WHERE are the allegedly hacked Democratic National Committee (DNC) servers?

According to the DNC’s lawsuit against President Trump, Russia, Wikileaks, Jared Kushner, Roger Stone, Paul Manafort, and many others, the DNC’s IT staff discovered that its servers were hacked on April 28, 2016. It then hired a cybersecurity firm called CrowdStrike Services, Inc. to “investigate the attack, assess the damage done to the DNC’s computers and servers, and assist the DNC in its remediation efforts.” The complaint goes on to state that “As a result of the persistence of the Russian state-sponsored infiltration, in order to remove the unauthorized users from its network, the DNC was required to decommission more than 140 servers, remove and reinstall all software, including the operating systems, for more than 180 computers, and rebuild at least 11 servers.”

Interestingly, the complaint does not state that the servers were turned over to the FBI? Why? Because they were not turned over to the FBI. Former FBI Director James Comey testified to this at his hearing on January 10, 2017. He said that the FBI made “multiple requests at different levels” to gain access to the servers, but they settled for merely receiving information from CyberStrike: “Ultimately what was agreed to is the private company would share with us what they saw…our forensics folks would always prefer to get access to the original device or server that’s involved, so it’s the best evidence.” CyberStrike provided the FBI with images of the server and reports of their analysis, but not the actual servers.

These facts are getting lost, or purposely ignored, in this latest anti-Trump hysteria. If this was truly a matter of national security, why would the FBI settle for mere reports and images from a third party? Why did the FBI draw conclusions about Russian hacking without firsthand knowledge of the alleged evidence from the servers? Where are the “decommissioned servers”? What about the “rebuilt” servers? Was key evidence lost and/or destroyed when these servers were “rebuilt”? Why have mainstream media, Democrats, and establishment Republicans unquestioningly grasped onto the FBI’s assertions of Russian hacking, given the absence of a clear chain of custody of the servers and a mere pile of second-hand evidence? Is something being covered up? Is there evidence that perhaps, gasp, Russians were not the only ones hacking?

Mainstream media, liberal Democrats, and even some Republicans have become completely unhinged since the Helsinki summit and press conference. Epitomized by CNN’s Chris Cuomo’s statement that July 16, 2018 would “live in infamy,” the baseless frenzy and panic has apparently obscured these anti-Trumpers’ ability to think clearly, ask questions, and demand evidence, as productive, competent American citizens should do about all issues. Their screaming is so loud, they apparently do not hear the voice of reason.

And that voice belongs to President Donald Trump, who rightly is asking crucial questions: Where are the servers? What’s being hidden?