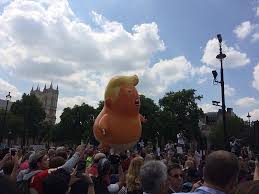 So apparently the Baby Trump balloon is making its way to New Jersey. A group of New Jersey activists have raised money, via a GoFundMe campaign,  to construct a similar balloon to that which was seen in London during the President’s recent visit. The group’s lofty (no pun intended) goal is to fly it when President Trump visits his golf course in Bedminster, New Jersey next month.

According to their GoFundMe page, the group initially sought $4,500, which they raised in less than a day. Baby Trump balloon supporters donated approximately $24,000 before the campaign stopped accepting donations.

Group leaders are now proudly touting the fact that they have enough money to construct not one, but four, Baby Trump balloons. These activists, who maintain a schedule of daily protests throughout New Jersey,  have grandiose plans of bringing balloons to Trump’s other golf courses in New Jersey and for loaning them out to other protesters across the country.

“Given your generous response we will be purchasing more than one Baby so we can go coast-to-coast, border-to-border,” they proclaimed on their GoFundMe page. “Our goal is to make Baby Trump available to various locations around the country.”

Hold the balloon strings just a minute here…hypocrisy is soaring,  along with the usual stupidity that is expected from these groups. All of these anti-Trumpers are spending their hard-earned (that is, assuming they have actual jobs, since they do spend every day protesting) money on BALLOONS?! Wouldn’t their money be better spent on the causes they claim to care so much about? What about the reasons they are purportedly protesting in the first place? What about the immigrant children, whose cause they are supposedly supporting through their protests? Surely there are charitable organizations, immigration advocates,  and others who could use this money. How about sending it to humanitarian organizations that assist in the impoverished countries from which the immigrants come?  But no, $24,000 is going toward balloons.

There’s a difference between claiming that you care and actually caring.