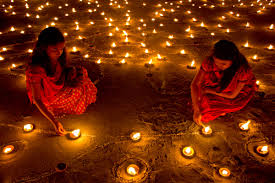 There may be a new holiday in the New York City public schools.

What is Diwali, you ask?

It’s not a Christian holiday.

Nor is it a Jewish holiday.

And nope – it’s not Muslim either.

Pick one of the following: Buddhist, Hindi, Jainism (whatever that is), Jedi Knights (huh?), or Mithraism (???).

Confucius say it’s a holiday from the Hindu religion.

According to a press release issued:

“Hindus are urging New York City (NYC) Council to support the idea of Diwali as permanent official holiday in the city schools as its Committee on Education is meeting on November 22 to discuss this issue…Hindu statesman Rajan Zed, in a statement today, said that it was not fair with Hindu pupils and their families as they had to attend school on Diwali, the most popular Hindu festival…NYC Department of Education school calendar 2016-2017 included the holiday closures on Rosh Hashanah (two days), Yom Kippur, Eid al-Adha and Eid al-Fitr. Good Friday (which falls during the Spring recess of April 10-18 when the schools are closed) is also paid holiday for employees (except for ‘prevailing wage rate employees’).”

“Zed, who is President of Universal Society of Hinduism, indicated that this unfairness did not send a good signal to the impressionable minds of schoolchildren who would be the leaders of tomorrow. Holidays of all major religions should be honored and no one should be penalized for practicing their religion. Moreover, it was important to meet the religious and spiritual needs of these students, Zed added…Zed stressed that since it was significant for Hindu families to celebrate Diwali day together at home with their children, we did not want our children to be deprived of any privileges at the school because of thus resulting absences on this day. Closing schools on Diwali would ensure that and it would be a step in the positive direction…Zed noted that awareness about other religions thus created by such holidays like Diwali would make the NYC pupils well-nurtured, well-balanced, and enlightened citizens of tomorrow….Zed further says that Hinduism is rich in festivals and religious festivals are very dear and sacred to Hindus. Diwali, the festival of lights, aims at dispelling the darkness and lighting up the lives and symbolizes the victory of good over evil. Besides Hindus, Sikhs and Jains and some Buddhists also celebrate Diwali, which falls on October 19 in 2017. Hinduism, oldest and third largest religion of the world, has about one billion adherents and moksh (liberation) is its ultimate goal. There are about three million Hindus in USA.”

Why not add Diwali as an official holiday for the NYC public schools? Two reasons: most kids will want another day off, so give it to them; and another day away from their teachers and the liberal crap that most of them are force-feeding upon them can make for a better America.