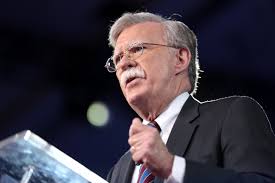 What is with all the liberal media hype over the appointment of John Bolton as the new National Security Adviser? The claims are clear: that Bolton is a war monger. But is he? And what is a war monger?

The reality is that there are indeed times when America’s own security is in jeopardy. When the nation is it at risk (of military invasion), then its citizens are in danger. Is it not sound to have an individual in the role of national security adviser who understands this basic proposition?

Is a leader a war monger if he believes it is right to engage in military action where America’s national security is in jeopardy? Squarely, the answer is “no.”

A person is a war monger where he proposes war as a solution for reasons other than the protection of national security. Examples of wrongful reasons to invoke the use of the military include engaging in battle for economic growth, the taking of land, religious/social purposes – and even to democratize another nation (when that nation otherwise poses no danger to the United States).

Bolton apparently felt/feels that America’s involvement in the Iraq War was justified. He believed it was necessary to protect the United States. He thought that America may be in harm’s way because Saddam Hussein harvested weapons of mass destruction. At the time, nearly every political leader thought this – Republicans and Democrats alike.

Today’s ambiguous, and often twisted, view of history claims that the belief that the then-Iraqi government owned WMDs was wrong. The reality is that no one really knows if Hussein possessed such weaponry. The “fact” that the American government never located these types of lethal weapons in Iraq is akin to meaningless. It is commonsense that Hussein, upon learning of America’s intent to launch military operations in Iraq, hid and/or deported the WMDs. He could have accomplished this before or after American military arrived. Additionally, one mustn’t forget that the country is rather huge—WMDs could still be there to this day, hidden.

Accordingly, Bolton’s thoughts regarding the Iraq War are not outrageous. Rather, they are sound.

And add this to the equation: at the time of America’s invasion into Iraq, that country – in addition to Afghanistan and likely others – were harboring Al Qaeda terrorists (who had indeed caused substantial harm, directly, to America and her citizenry). The same was the entire basis for the United States’ attack upon Afghanistan.

In taking out two strong Middle East tyrannical leaderships – the Taliban and Hussein – America sent a wholly important message to the rest of that region. That message was the following:

If you harbor terrorists who murder Americans, on American soil, you – personally – will be removed from your leadership and, perhaps, this Earth. When other Middle East dictators witnessed both the Taliban and Hussein being wiped out, the harboring of al Qaeda came to a screeching halt. This proved to be a highly protective measure for U.S. national security.

Hindsight, in a blurred version of history, is often unclear vision.

Supposedly, Bolton has talked about measures of war with Iran and North Korea. Well, so have numerous other American leaders.

If Bolton, or anyone, is urging war simply to obtain economic gain, or for purposes of nation building, then his thoughts are wrongful.

Those talks of military action are justified, however, if, again, America’s national security is in jeopardy. A warning that the United States will act, with war, is a tough, smart reminder to crazed foreign dictators that America will not allow her sovereignty to be jeopardized via the use of nuclear or other volatile weaponry. This appears to be Bolton’s method of operation, and the same is quite reasonable.

Engaging in war as a preventative measure is a loaded issue. For, when is “preventing” an attack upon the U.S. conduct that amounts to protecting American national security? The U.S. government, no doubt, should not enter into any military action upon another nation unless an attack upon America is truly imminent; even then, all efforts should be employed to avoid war.

A stroll down history lane may be instructive.

Hawaii was bombed without warning.

But what if the American government had learned that Pearl Harbor was about to be attacked by Japan? When would it have been justified for the U.S. to hit Japan first, as a preventative measure?

This is not an easy question to answer, except to say that if American leadership were “positive” that a bombing of U.S. soil was imminent, then America should strike first—to prevent an attack on her land.

Under all circumstances, back in 1941 and today in 2018, the United States should never engage in an act of war without a Declaration of War by Congress. The notion that the president, as a singular person, can cause the country to employ military combat is unconstitutional, as well as dangerous. However, many presidents (Democrats and Republicans) have violated this sacred rule. Give John Bolton the benefit of the doubt that he would not actually advise President Trump to take that unconstitutional course.

And give the president the benefit of doubt that he would never act in that unsavory unilateral manner. He has shown, much to the dismay of his vociferous and unfair detractors, that he is a deal-maker. He is willing to talk – and deal with – the foreign leaders, who past presidents have failed to accomplish anything with; President Trump, at least, has already made some progress with those foreign leaders. Given time, he may prove to fully succeed. The man is moving in the opposite direction of war. No one should think that his hiring of John Bolton will turn that ship around.

One reason is that the Bolton hysteria, as promulgated by the far left, appears to be fully unwarranted for the reasons detailed above. Another reason is this:

President Trump clearly is not beholden to anyone, nor manipulated by anyone. If he doesn’t like their advice, he simply fires them.