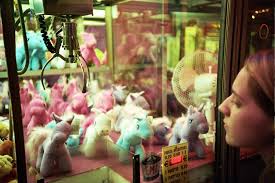 Recently, I represented a client for a motor vehicle violation in one of the many Municipal Courts in New Jersey.  This client looked at the operation of our legal system with the eyes of an outsider.  He observed, “It doesn’t seem fair that the lawyers speak with the prosecutors first.   The notice tells us to be here at a certain time, but nothing is happening.”  I joked that part of the punishment for a violation is the waiting.  I could feel his restlessness.

“Not like the legal shows on television? Municipal Court is not glamorous,” I added.  Then I told him about my days teaching college classes.  One of the courses was called Gender, Race, and Class.  Many of my students expressed their frustration with a system that is rigged to always favor those with power and money.   I compared equal opportunity to an arcade’s claw crane (claw grab machine) game.  The claw is usually too weak to pick-up the prize even if it is in the proper position.  However, sometimes people win.

Back in tedious setting of Municipal Court, the cast of characters:  judges, prosecutors, public defenders, police officers, defendants, attorney, etc. are trying to move the legal process along swiftly and efficiently.  There does seem to be a legitimate striving for equal opportunity and justice in the Municipal Court system.  Nonetheless, many of the defendants with lawyers are processed faster.  Is the price of a lawyer worth a shorter wait time?  Will money always bring you to the front of the line?  Does money and power offer an unfair advantage?