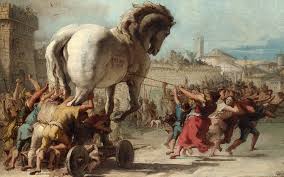 In Greek mythology, Helen of Troy was the face that launched a thousand ships. When she left her husband, King Menelaus of Sparta for her lover Prince Paris of Troy, the Trojan War broke out that is mythologized by Homer, Virgil and others. Of course, Troy fell after the Greeks rolled a hollowed-out wooden horse into their walled city as a gift. A horse filled with Greek warriors who opened the gates -ending Troy. Or so the story goes.

In modern America, there is a little-known government entity, the National Institute of Occupational Safety and Health (NIOSH), which is an arm of the Center for Disease Control. NIOSH has launched more than 1,000 lawsuits costing companies hundreds of millions of dollars over the past fifteen years due to their determination that a naturally occurring as well as synthetically produced chemical, diacetyl, is linked to injuries and deaths involving microwave popcorn workers among others.

There is only one problem – their science may not be right.

So what is diacetyl?  It is a naturally occurring chemical that is found in low concentrations of fermented foods like butter, beer and yogurt. It is also made synthetically to add buttery flavor to popcorn, chips and even coffee. Safe to eat in trace amounts, according to the U.S. Food and Drug Administration (FDA), the question is what quantity of the chemical is safe to inhale.

Bronchiolitis obliterans also known as popcorn lung is no joke, despite its almost comic book descriptor, but it is reasonable to ask whether NIOSH jumped the gun when they created the wave of lawsuits based upon their findings.

Years after the initial NIOSH finding, the Toxicology Excellence for Risk Assessment (TERA) produced a 2008 report, which casts strong doubt on whether diacetyl is actually the villain that NIOSH and trial lawyers have made it out to be.  TERA states, “The causal link between diacetyl and the onset of bronchiolitis obliterans is not certain.”

NIOSH itself is listed among the recent sponsors of TERA at the outset of its report, so while the funding came from the food industry, it is safe to conclude that the contrary conclusion to NIOSH’s earlier findings should be taken seriously.

Additionally, the highly respected chemical toxicology firm, Cardno ChemRisk, has studied the impacts of diacetyl extensively over the past decade.  In a study published in Critical Reviews on Toxicology, they wrote, “We found that diacetyl and 2,3-pentanedione exposures from cigarette smoking far exceed occupational exposures for most food/flavoring workers who smoke.” One line down they continue, “Further, because smoking has not been shown to be a risk factor for bronchiolitis obliterans, our findings are inconsistent with claims that diacetyl and/or 2,3-pentanedione exposure are risk factors for this disease.”

The argument against NIOSH’s findings can even be found within the Obama administration’s Department of Labor’s Occupational Safety and Health Administration (OSHA), where after eight years of controversy over regulating diacetyl, they chose not to regulate the chemical in the workplace. When Obama’s radical OSHA decides not to act, it should serve as a touch point for trying to get to the real truth of the matter.

Meanwhile, like the Trojan War of old, the trial lawyer bar is besieging the walls of business on many fronts, looking for weaknesses that might allow them to hit a massive payday.  When it comes to diacetyl lawsuits, NIOSH is the Trojan horse that has been wheeled behind those walls, unleashing a horde of trial lawyers looking for industries to sue.  It doesn’t matter to them whether diacetyl is the agent of illness, only that they can convince a jury, using NIOSH as their lead witness, that it does.

Given the fact that there is serious and reasonable doubt about the causal factors of bronchiolitis obliterans, combined with the Obama Administration’s determination to not impose  workplace standards, it is time for a common sense approach to diacetyl.

Bruce Fein, a former senior ranking Reagan Administration official recommends that the federal government set up a process similar to the one undertaken in 1977 in examining saccharin.  He wrote in the West Virginia Record, “In 1977, the FDA proposed a ban on saccharin as a human carcinogen required by the Delany Amendment.  Congress balked.  It passed the Saccharin Study and Labelling Act which placed a moratorium on the ban but required labels warning that saccharin could cause cancer.  After two decades of further study, the National Toxicology Program delisted saccharin as a carcinogen in 2000.

This seems like a reasonable approach to what heretofore has been an intractable problem that NIOSH and the credibility of the federal government have been used as the cudgel in legal cases, when their determinations are disputed by multiple respected alternative studies.

It’s time to get to the right answer on diacetyl, rather than having the trial bar use one agency’s claims, that another agency of government has chosen not to act upon, to drive businesses engaged in innocuous activity like grinding coffee beans into legal hell.