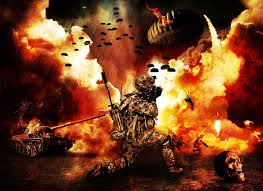 It’s being called an attack equivalent to Pearl Harbor, where 2,403 Americans died when the Japanese brought the U.S. into World War II in 1941.

Russia attacked America. It meddled in the 2016 election.

Appearing on MSNBC, U.S. Rep. Jerry Nadler (D-N.Y.) made the comparison, blasting President Donald Trump for his perceived inaction, “Imagine if FDR had denied that the Japanese had attacked us at Pearl Harbor and didn’t react. That’s the equivalent.”

Apparently, Nadler believes the Russian intrusion into American politics should be cause for war between the world’s foremost nuclear powers.

So, what was the “equivalent” of bombing Pearl Harbor?

Hacking the Democratic National Committee and putting the emails onto Wikileaks? Or can we still not prove that?

No, this time the diabolical scheme was a Russian company called the Internet Research Agency that bought ads on Facebook, according to Special Counsel Robert Mueller, spending “thousands of U.S. dollars every month” beginning in 2015, totaling about $100,000 according to Facebook, what the company allegedly called “information warfare.”

In an election where $2.4 billion was spent by both sides, and the Special Counsel is wasting the nation’s time indicting a Russian company — the principals of which will never face trial or extradition — for less than 1 percent of all campaign spending, 0.004 percent.

And, get this, of the ads bought, per Facebook, “44 percent of total ad impressions (number of times ads were displayed) were before the U.S. election on November 8, 2016; 56 percent were after the election.”

Even if Mueller’s indictment didn’t ignore the pro-Clinton ads prior the election and then the anti-Trump ads that ran after it, is this the reason why Nadler thinks we should be on a war footing?

Over foreign-purchased ads that did not comply with federal election laws?

Just this month U.S.-led forces in Syria were attacked by Russian soldiers, where more than 100 Russians were killed in the battle. Thankfully, cooler heads prevailed, and Secretary of Defense James Mattis and Moscow agreed publicly that the incident was not officially sanctioned by Russia. Bloomberg View’s Eli Lake compared it to Plato’s “noble lie,” an effort to prevent a wider escalation of tensions between the two superpowers.

Mueller’s mandate as Special Counsel is to “ensure a full and thorough investigation of the Russian government’s efforts to interfere in the 2016 presidential election… [including] any links and/or coordination between the Russian government and individuals associated with the campaign of President Donald Trump.”

As Deputy Attorney General Rod Rosenstein noted in his press conference announcing the indictment, “There is no allegation in this indictment that any American was a knowing participant in this illegal activity.” Meaning, there is no allegation that the Trump campaign or any other campaign cooperated in these activities. Rosenstein also noted it had no impact on the outcome of the election.

This case might seemingly reach the first threshold, but nowhere in Mueller’s indictment does he actually allege that the Russian government actually directed the ads be put up. Or can’t he prove it?

Just saying. It’s Mueller’s job to prove the Russian government conspiracy, not ours. If he won’t even make the allegation, why should the American people and our representatives in Congress waste another two taxpayer cents on this rubbish?

Instead, Mueller links the ads to companies Concord Management and Consulting LLC and Concord Catering, “related Russian entities with various Russian government contracts.” So, it was not even a Russian intelligence agency that did the ads. It was a government contractor.

Which, if Radiosvoboda.org’s Viktor Rezunkov is to be believed is a company that spends most of its time commenting on news articles in Russia and making memes. According to Rezunkov, writing in 2015, translated from Ukrainian, the Internet Research Agency has departments “engaged in the blogosphere, in another they are preparing TK — technical tasks, in the third one — they comment on the news in Russian and foreign media, in the fourth — mount photos in the photoshop, forcing, say, heads of [Alexei] Navalny and [Barack] Obama to the bodies of animals, and so on.”

This is why we’re risking Word War III? Over bush league Internet trolls who otherwise spend their time photoshopping the faces of politicians onto the bodies of animals?

If Russian diplomats appeared at the UN alleging that U.S. shell companies had posted silly ads on Facebook against Putin in an effort to “topple” him, and called it the equivalent of Operation Barbarossa, they’d rightly be laughed out of the building. Nadler and others have lost their ever-loving minds.

Maybe one day historians will have a great laugh over all this at our expense. That is, assuming they’re not writing the history of the world that was from a fallout shelter.