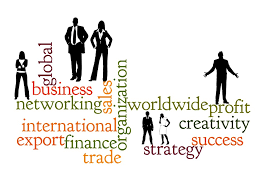 More than any other issue, President Donald Trump’s vow to renegotiate the North American Free Trade Agreement (NAFTA) or else leave it may have been the most important reason he won the Electoral College in 2016 against his opponent, Hillary Clinton.

In the rust belt they included states that traditionally voted Democrat. And they’re what put Trump over the top in 2016.

These were some of the states hit the hardest by NAFTA.

Ohio has lost 290,874 manufacturing jobs since the NAFTA and World Trade Organization (WTO) era began in 1994 and 1995 respectively, according to data compiled by the Bureau of Labor Statistics and Public Citizen.

Pennsylvania has lost 312,338 factory jobs since then.

Florida has lost 82,006 jobs in manufacturing.

Fortunately, since taking office in 2017, President Trump has been working to keep his promise. On April 27, Trump took to Twitter to announce, “I received calls from the President of Mexico and the Prime Minister of Canada asking to renegotiate NAFTA rather than terminate. I agreed… subject to the fact that if we do not reach a fair deal for all, we will then terminate NAFTA. Relationships are good — deal very possible!” Since then the negotiations have been initiated.

Good thing for him, as keeping the NAFTA promise to modernize it, getting a better deal, or end it is critical, not only to his political coalition, but to creating more jobs in the U.S.

In 2016, particularly at the Sept. 26 debate the President blasted Hillary Clinton on NAFTA, stating, “Your husband signed NAFTA, which was one of the worst things that ever happened to the manufacturing industry.”

Clinton’s reply couldn’t have been scripted better by Trump himself. She said, “That’s your opinion.”

At that point in the race, Trump was already leading in polls in Ohio and rallying from behind in Pennsylvania, Michigan and other rust belt states — states whose manufacturing presence has been decimated in the past two decades. This gaffe by Clinton was huge, and the facts on the ground in these states tell the tale.

To be certain, since the North American Free Trade Agreement (NAFTA) went into effect in 1994, about 5 million manufacturing jobs have been lost nationwide according to data compiled by the Bureau of Labor Statistics.

It is certainly debatable whether NAFTA bears all the blame. The President has also rightly cited China’s entry into the World Trade Organization in 2001 and Congress granting permanent normal trade relations with Beijing in 2000. And maybe it wasn’t even all trade.

Either way, the job losses were real. They actually happened. Not opinion.

Clinton could have argued until she was blue in the face that it wasn’t the trade deals, but those jobs still were not coming back in time for the election. That is why Clinton’s dismissive remark was perhaps her biggest gaffe of the presidential election campaign, particularly when one takes a close look at the electoral map. She could have at least acknowledged the losses and the possibility that the trade deals played a role. Instead, in a very risky move, she dismissed the concern with hand waving akin to Marie Antoinette’s supposed saying, “Let them eat cake.”

As it turns out, the one thing she couldn’t afford to lose are any more of were union households that traditionally vote Democrat in states like Ohio, Pennsylvania and Michigan, who remain greatly concerned by the economic decline the U.S. has experienced.

There still remain nearly 9 million of this age group out who either left the labor force or never entered on a net basis had participation remained at the same rate as it was in 2000, which has been hampering growth. 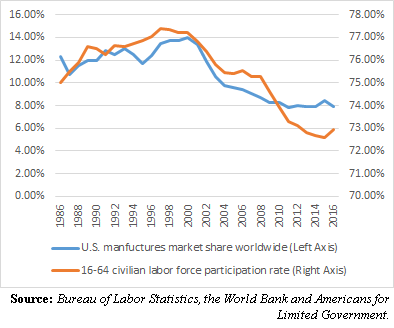 President Trump beat Clinton by punishing her on NAFTA and other bad trade deals. It is the issue he alone had the vision to bring to the fore in 2016. That is why he must succeed in renegotiating NAFTA or withdrawing from it in order to help the economy to recover and create new factory jobs in the U.S., keeping his rust belt coalition that won the day in 2016 together.

Not only does the 2020 election hang in the balance, so does U.S. economic strength and boosting labor participation. Fix it or end it.