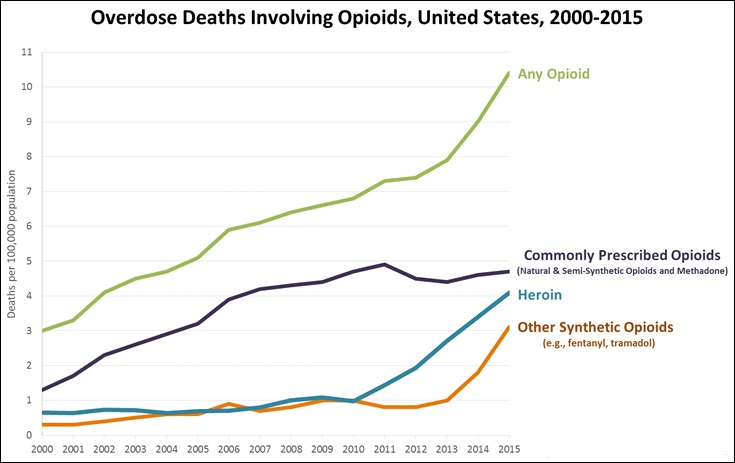 President Donald Trump declared the opioid crisis a public health emergency, stopping short of a national emergency this past week. This has been a growing problem in America that has wreaked consistant havoc in rural areas. Senior administration officials said on a conference call with reporters that Trump’s declaration will redirect federal resources and loosen regulations to combat opioid abuse.

Trump said, “This epidemic is a national health emergency. Nobody has seen anything like what’s going on now. As Americans, we cannot allow this to continue.” Some advocates and experts in the addiction fight were disappointed by the announcement. They said it was inadequate to fight a scourge that played a role in more than 33,000 deaths in 2015. Estimates show that the death rate continues to rise. The Opioids that are primarily fueling the drug overdoses in America are prescription painkillers, like heroin and fentanyl. According to the CDC more than 100 Americans die daily from related overdoses.

Trump was urged by the White House commission on the drug crisis to declare a national emergency. He agreed to do so. The Federal Emergency Management Agency funds that would have been released under a national emergency are already exhausted from recent storms that struck Puerto Rico, Texas and Florida. Therefore, the administration would have to work alongside Congress to help provide additional funding to address drug abuse. Therefore treatment is going to be made more accessible for abusers of prescription painkillers, heroin and fentanyl, while making sure there are fewer delays in staffing the Department of Health and Human Services to help states deal with the crisis.

During his visit to Asia next month, Trump said he would discuss stopping the flow of fentanyl, a drug 50 to 100 times more powerful than morphine, with Chinese President Xi Jinping.

The U.S. Postal Service and Department of Homeland Security are “strengthening the inspection of packages coming into our country to hold back the flood of cheap and deadly fentanyl, a synthetic opioid manufactured in China,” stated Trump. “Bad actors” will be faced with lawsuits in the epidemic. The business practices of manufacturers are being investigated by congress and several states have sued opioid manufacturers for deceptive marketing.

The government should focus on teaching young people not to take drugs. President Trump said, “There is nothing desirable about drugs. They’re bad.” The Department of Labor will be able to issue grants to help dislocated workers affected by the crisis. Officials said, HIV/AIDS health funding would also be prioritized for those who need substance abuse treatment. This is another reason that building a wall on the U.S. Mexico border will be a help and protection to the people of America. Trump is very much in favor of stopping the flow of illicit drugs into the United States and errecting a wall is a wise option. After all the definition of insanity is doing the same thing over and over again and expecting a different result.