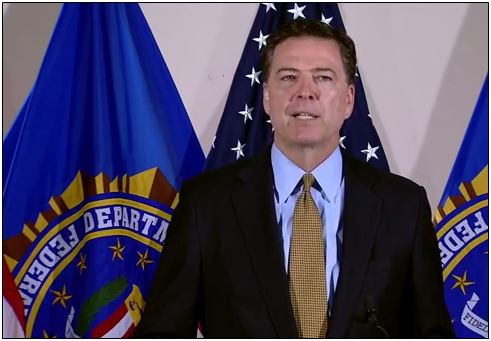 The FBI has been in the headlines for all the wrong reasons lately. Half the country is upset at the handling of the Hillary Clinton investigation and the announced outcome on July 5, 2016. The other half of the nation believes the Comey cost Clinton the election by declaring the FBI was reopening the investigation following the discovery of more emails on Anthony Weiner’s computer. And now it looks like the former FBI Director may have perjured himself.

What is perjury? Perjury is considered a crime against justice. These are crimes against “Justice” itself. These offenses include bribery, contempt of court, and perjury. The penalties for these crimes can be severe.

These offenses carry substantial penalties, including imprisonment. 18 U.S.C. 1621 states, “in any declaration, certificate, verification, or statement under penalty of perjury as permitted under section 1746 of title 28, United States Code, willfully subscribes as true any material matter which he does not believe to be true; is guilty of perjury and shall, except as otherwise expressly provided by law, be fined under this title or imprisoned not more than five years, or both.”

There are three general federal perjury laws. 18 U.S.C. 1621, outlaws presenting material false statements under oath in official federal proceedings. 18 U.S.C. 1623, bars presenting material false statements under oath before or ancillary to federal court or grand jury proceedings, and finally 18 U.S.C. 1622 (subornation of perjury), prohibits inducing or procuring another to commit perjury in violation of either Section 1621 or Section 1623.

Perjury is very hard to prove. Not only do you have to show the person in question is lying, but it must also be determined the person knew the information was false. If someone misremembers or thought a blue shirt was black, that does not make it perjury.

The question being asked is, did James Comey perjure himself?

Following the exoneration of Mrs. Clinton, Comey was summoned to Capitol Hill to answer questions in September of 2016. The exchange between Rep. John Ratcliffe (R-Tex.) and Comey was particularly interesting:

Rep. Ratcliffe. Thank you, Mr. Chairman. Director, did you make the decision not to recommend criminal charges relating to classified information before or after Hillary Clinton was interviewed by the FBI on July the 2nd?

Seems like the right way to run an investigation. Collect all the facts from all the witness, then make a judgment. However, it didn’t end there.

The Senate continued to investigate the matter and found something that directly contradicts what Comey stated under oath. Chairman of the Senate Judiciary Committee Charles Grassley (R-Neb.) and Lindsey Graham (R-S.C.) sent a letter to the new Director of the FBI Christopher Wray asking for more documents and information. Part of the letter states,  “According to the unredacted portions of the transcripts, it appears that in April or early May of 2016, Mr. Comey had already decided he would issue a statement exonerating Secretary Clinton. That was long before FBI agents finished their work. Mr. Comey even circulated an early draft statement to select members of senior FBI leadership. The outcome of an investigation should not be prejudged while FBI agents are still hard at work trying to gather the facts.”

As you can see this is clearly not what Comey stated before Congress.

The question becomes, was this misstatement intentional? At the very least it requires another trip to Capitol Hill for Comey and more questions. Is it a good idea to circulate a draft exonerating the person being investigated before the FBI interviews the person? Did Comey draft a statement stating his recommendation to indict Clinton? The whole episode has destroyed the trust the American people have in the FBI. It is up to Attorney General Jeff Sessions to take control and restore the reputation of the FBI.