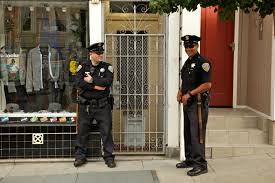 Most police officers are honorable and conscientious in their valiant service to the community. In fact many young boys and girls who desired careers in law enforcement reported being attracted by the uniform, the badge, the gun, the fast police cruiser and, most of all, the thrill of pursuing and catching the “bad guys.”  The excitement and the ability to wield absolute power over other human beings is attractive to most and many thrive off of the prospect of being cited as heroes. Even a smaller number of people actually become policemen & policewomen because most lack the self-discipline to obtain the requisite education and training the goes along with the position.

However, problems arise when a person with a criminal personality fights to complete the education and training and actually becomes a law enforcement officer. Some extreme cases are the cop who uses excessive force and may be sanctioned for “police brutality.”  The officer who pulls a female motorist over and if she “agrees” to have sex with him he will forego issuing a citation.  Or the policeman who confiscates drugs but uses some of them himself.

Then there are the officers who commit crimes under the radar by accepting bribes in exchange for turning a blind eye and not reporting a crime. One tell tale sign of a police officer with a criminal personality is one who does not get along with fellow officers and has interpersonal clashes with colleagues and supervisors. More times then not, these cops continue to keep their jobs because they know the system and are able to maneuver their way out of a jam. These are also the narcissistic sociopath personalities types who are able to pull the wool over people’s eyes and charm their way back into good graces unless they are exposed by someone with a keen eye.

Sadly, these men and women continue on in their careers of law enforcement and are never held accountable for what they’ve done behind their carefully structured guise of a badge or shield. One example is Officer, Drew Peterson. According to reports, Peterson was found guilty of failing to report a bribe and official misconduct, he was also accused of using excessive force. He was then fired from the Bollingbrook (Illinois) police department. Unfortunately he later won reinstatement and the charges were dropped. None-the-less when his fourth wife disappeared in 2007 he was finally charged in the 2004 death of his third wife. It took years to bring Peterson to justice.

“High voltage” occupations are attractive to criminals and mentally unstable individuals who seek power for their own gain. The cover of being a crime fighter enables these psychotic individuals to commit crimes that will serve them as they misuse their positions of authority. They will eventually slip up when they become comfortable and overly confident with a twisted life of undercover crime.