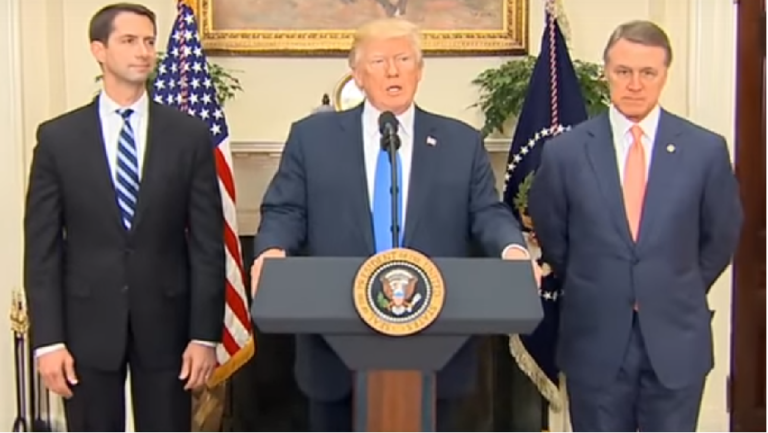 The Hart – Celler Act of 1965 abolished the immigration quota system and liberalized the rules for immigration. It put a priority on family reunification and increased the number of immigrants allowed. The next major immigration act was the Simpson–Mazzoli Act of 1986. This bill legalized all illegal immigrants in the US, and was supposed to enforce immigration laws by going after employers. Both bills had disastrous results for America by balkanizing communities and not putting Americans first. The administration wants to change that.

On Wednesday President Trump decided to put Americans first, and voiced his support for a slightly modified version of S. 354, the “Reforming American Immigration for Strong Employment Act” RAISE Act. The bill was introduced by Senators Tom Cotton (R-Ark.) and David Perdue (R-Ga.) earlier this year. It is the first major change of the legal immigration system in over 50 years. Perdue stated, “Returning to our historically normal levels of legal immigration will help improve the quality of American jobs and wages.”

One provision the bill specifically targets is chain migration. Chain migration allows one immigrant to sponsor many members of their family; to include spouses, parents, and adult siblings. Chain migration is divided into four categories:

•1st Preference: Unmarried sons/daughters of US citizens and their children

•3rd Preference: Married sons/daughters of US citizens and their spouses and children

•4th Preference: Brothers/sisters of US citizens (at least 21 years of age) and their spouses and children

Once someone from the previous chain is allowed entry into the US, they then continue the next link in the chain by doing the same thing. If you want to know how California went from Republican red to deep Democrat blue, think chain migration and Simpson—Mazzoli.

Chain migration has had a disastrous outcome on social services. If only one person out of twenty in a family has the ability to earn a living in the US, the rest of the family will depend on public services to survive, a resource thin public services department that cannot take care of the people already in the US. The Center for Immigration Studies estimated that 51 percent of immigrant households are on some form of welfare.

Why would the US import people to put on the taxpayer dime while running a deficit and accumulating seemingly insurmountable debt? The RAISE Act limits chain migration to spouses and minor children, and limits the burden on taxpayer wallets.

The legislation will also put an end to the Diversity visa lottery program in the State Department. The program assigns a maximum of 50,000 green card visas to those who win a worldwide lottery. However, according to Inspector General reports the program is fraught with fraud. Organized crime rigs the system by flooding it with applications, then controlling the response. If someone cannot afford to pay for their ID number, they can be forced into sham marriages. This is only the tip of the iceberg in fraud involving the program.

These are simple steps that can be taken to protect taxpayer dollars and help the US economy grow. Millions of Americans are jobless, while millions more are underemployed. It makes no sense to import people to do work while Americans are out of work. For any person wishing to come to the US, a simple question must be asked, “Does this person benefit the US?”

Printus LeBlanc is a contributing reporter for Americans for Limited Government