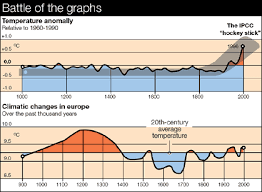 A little-known court case is taking place in the Supreme Court of British Columbia in Vancouver. This case involves two scientists and two set of graphs. One of the graphs is very famous, and the basis for every man-made climate change believer’s faith, while the other…is not. The foundation of the church of man-made climate change is on shaky ground, and an earthquake could be coming.

Michael Mann is a climatologist and geophysicist working at Penn State University. In 1998, he was the leader of a group using statistical techniques that created a graph showing the earth’s temperature over the last 1,000 years. The graph would gain international fame and become known as the “hockey stick graph.” The graph showed steady temperatures on the earth’s surface with a sharp increase in the last few hundred years, giving it the shape of a hockey stick.

The graph is a religious artifact to those that belong to this religion. It is so revered that those who created it, were invited to work with the Intergovernmental Panel on Climate Change (IPCC) on its 2001 scientific assessment report. The assessment came to many conclusions, but three stick out:

1There is new and stronger evidence that most of the warming observed over the last 50 years is attributable to human activities;

1Human influences will continue to change atmospheric composition throughout the 21st century;

2And, global average temperature and sea level are projected to rise under all IPCC SRES scenarios.

Not surprisingly, the conclusions also involve more government control over what people do, and more money for man-made climate change research. Figure 1. shows how much money the Government Accountability Office claims the federal government has spent on combating supposed climate change between 1993 and 2010. Today, it is harder to find the facts on how much is actually being spent by the federal government, but Salon is reporting over $12 billion is to be spent this year, and other organizations are reporting up to $27 billion is expected to be spent.

The worldwide climate change industry is valued to be worth $1.5 trillion. That’s a lot of money for “research.” Enter Dr. Timothy Ball.

Dr. Ball has a PhD in climatology from Queen Mary University of London, and was a professor at the University of Winnipeg. He is an avid critic of the man-made climate change theory. It is not that he does not believe in climate change, but he does not believe humans are having the impact the church of man-made climate change says they are. He has written dozens of articles, appeared on numerous television shows, and written a book called “The Deliberate Corruption of Climate Science.”

Dr. Ball also created his own version of the “hockey stick graph,” but it looked nothing like Mann’s. Ball’s graph shows what is known as the Medieval Warm Period. That period occurred between AD 900 and AD 1300 in which the Northern Hemisphere was much warmer than it is now. It is a much-debated period because of the possibility it destroys the man-made climate change theory.

Dr. Ball is enemy number one for the church of man-made climate change. One article he wrote made light of the connection between Mann and the Climatic Research Unit email controversy. Mann did not take to kindly to the slight, and decided to sue for libel. It is one of Mann’s many libel lawsuits he has filed against people with whom he disagrees.

The court case has not worked out the way Mann envisioned. Dr. Ball did not lay down and instead decided to fight the case. The case was filled in Canada and known as a Strategic Lawsuit Against Public Participation suit. It was filed six years ago, and is going sideways for Mann. The judge in the case has ordered all data used to make both graphs be handed over by all parties. Dr. Ball has cooperated, but Mann has not.

Dr. Ball recently stated, “We believe he [Mann] withheld on the basis of a U.S. court ruling that it was all his intellectual property. This ruling was made despite the fact the U.S. taxpayer paid for the research and the research results were used as the basis of literally earth-shattering policies on energy and environment. The problem for him is that the Canadian court holds that you cannot withhold documents that are central to your charge of defamation regardless of the U.S. ruling.”

John O’Sullivan reports on the punishment that Dr. Ball’s lawyers could ask for if Mann is found to be in contempt, “Ball is entitled to have the court serve upon Mann the fullest punishment. Contempt sanctions could reasonably include the judge ruling that Dr. Ball’s statement that Mann “belongs in the state pen, not Penn. State’ is a precise and true statement of fact. This is because under Canada’s unique ‘Truth Defense’, Mann is now proven to have willfully hidden his data, so the court may rule he hid it because it is fake. As such, the court must then dismiss Mann’s entire libel suit with costs awarded to Ball and his team.”

If this holds true, then the basis of the entire Paris climate agreement, IPCC, and every climate change agreement is in jeopardy. If it was all formed from faulty data, it is all at risk. The hockey stick graph is responsible for hundreds of billions of taxpayer dollars being spent around the world, and hundreds of job-killing regulations being enacted on the American worker. It is time we find out if it was all fake.