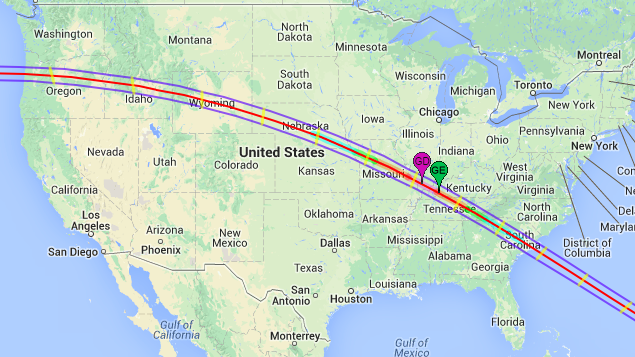 A partial solar eclipse will be visible over a surrounding region thousand of kilometers wide, while totality will occur in a narrow path across Earth’s surface. This coming eclipse is a member of the Saros series 145 and will be the 22nd of the 77 members. The Saros series 145 also produced the solar eclipse of August 11, 1999. The members of the Saros series are increasing in duration. On June 25, 2522 it is predicted that the longest eclipse in the series will occur and last for 7 minutes and 12 seconds.

The total eclipse will be visible from a narrow corridor throughout the US and have a magnitude of 1.0306. Shortly after 10:15 a.m. PDT at Orgeon’s Pacific coast it will first be seen from land. It will then progress eastward through Salem, OR; Casper, WY; Lincoln, NE; Kansas City, Nashville, TN; Columbia, SC and Charleston, SC. Shortly after 9:00 a.m. PDT along the Pacific Coast of Oregon a partial eclipse will be seen for a greater time period.

In Giant City State Park, just south of Carbondale, Illinois the longest duration of totality will be 2 minutes 41.6 seconds. Near the village of Cerulean, Kentucky between Hopkinsville, KY and Princeton, KY will the house the greatest extent (width) of the total eclipse. Since the solar eclipse on March 7, 1970 that was only visible from Florida, this will be the first solar eclipse visible from the Southeastern United States.