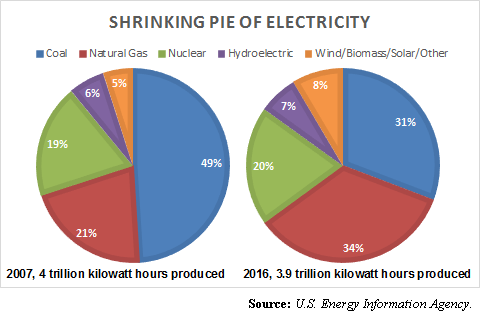 Nearly 100 people are back to work in Pennsylvania, where the newly opened Corsa Coal Corporation’s Acosta Mine in Somerset County, Pa. will produce 400,000 tons of coal annually for 15 years. President Trump vowed to end the war on coal and prioritize job growth, this mine opening shows he is already on his way to making this dream a reality.

Trump praised the mine’s opening in the Rose Garden while he announced the United States withdrawal from the Paris Climate Accord, the gesture was meant to highlight Trump’s focus on returning jobs and stable energy to the nation over environmental policy.

President Trump could not have selected a more pressing time to make this announcement, as weakening infrastructure in our nations power grid has halted economic growth and placed our entire country at greater risk for rolling blackouts.

Despite being a “resilient” energy source — meaning they have the ability to withstand natural disasters, supply shortages, and even terror attacks — coal and nuclear energy have been largely replaced in favor of natural gas and “cleaner” energy sources.

President Obama’s war on coal gave the EPA unprecedented power to close coal mines that were deemed environmentally harmful, forcing coal electricity production to shrink from 49 percent of the grid to just 31 percent and nuclear energy production unchanged since 2007, according to the U.S. Energy Information Administration(EIA).

At this rate, the United States has reduced usage of needed energy sources so significantly, its putting the entire nations energy supply at risk.

Meanwhile, the government under former President Barack Obama created federal subsidies for green industries, despite the reality that neither wind nor solar energy produce consistent or enough power to meet our country’s electricity demands.

The stunted growth of nuclear energy and reduction of coal energy has proven to be a catalyst for economic devastation as well. In Ohio, Pennsylvania, and Indiana the coal sectors decreased by 49 percent, 44 percent and 37 percent, resulting in nearly 50,000 coal jobs lost during Obama’s presidential term.

President Trump has made a great start on reopening the coal industry, but regulations are still prevalent throughout both the coal and nuclear energy sector, including the 2009 Carbon endangerment finding as well as the new and existing coal power plant regulations.

On the nuclear front, in the last 20 years, only one nuclear plant has been successfully opened according to the EIA. In fact, the EIA reports that nuclear energy’s share of the nation’s electricity generating capacity will continue to drop from 20 percent to 11 percent by 2050, coinciding with a predicted growth in electricity demand of up to 92 percent over the same period of time.

The reason for the decrease? Regulations by the federal government which have made nuclear energy unattainable.

The Morning Consult of June 2017 explains, “Nuclear-powered plants can produce reliable, base-level electricity…with zero carbon emissions. Engineering innovations have resulted in advanced nuclear reactors that are much safer, more efficient, and more affordable than reactors currently in use…Unfortunately, regulatory requirements here at home have driven the cost of bringing new reactor technology to market so high that power companies are instead lobbying for billions in subsidies to keep decades-old technology in operation… Innovation has put to rest many of the safety concerns that regulation was meant to protect us from.”

Instead of fostering this innovation and generating energy that can meet our national demands, the U.S. is relying on archaic laws regarding nuclear energy — all the while shutting down Yucca Mountain, the only permanent place in the country to store spent nuclear fuel.

For example, Gerald Ford asserted in 1976 that nuclear energy could not be recycled due to the possibility of creating nuclear explosives. This, despite admitting in his October 28, 1976 Statement on Nuclear Policy that, “nuclear energy represents one of the best hopes for satisfying the rising world demand for energy with minimum environmental impact and with the potential for reducing dependence on uncertain and diminishing world supplies of oil.”

Somehow, France, Great Britain, and Japan have all successfully generated energy from recycled and reprocessed nuclear fuel and have never managed to accidently make a nuclear weapon. France todays generates 80 percent of its electricity needs with nuclear power — much of it generated through recycling old fuel.

The opening of this coal mine in Pennsylvania was a great step toward stable energy for our country, but President Trump needs to take it a step further. In order to secure our energy grid with coal and nuclear power to prevent millions from losing power, Congress and the President must continue removing regulations, allow nuclear reprocessing, reopen Yucca Mountain and expedite review and ultimately the rescission of the Clean Power Plan.

The former Obama Administration harmed the energy security of the entire country, now we are a step closer to getting our power back. But Congress and the President still have much to act upon.