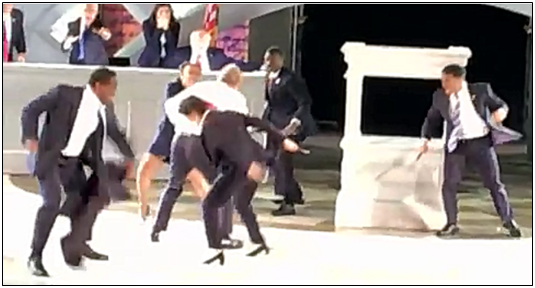 Does the portrayal of Julius Caesar as President Donald Trump in New York City Public Theater’s production of William Shakespeare’s play of the same name in Central Park, where Caesar is stabbed to death, miss the Bard’s central warning of the perils of political violence?

As readers are familiar — or ought to be familiar — with, things do not turn out so well for the conspirators both historically and in the course of the play, which does not end after the assassination.

In the final act, the Caesarian party of Antony and Octavius win and everyone knows what happens next — of they should — the emperors come to rule Rome, not the Senate.

Arguably, the conspirators against Caesar ultimately created the very circumstances they sought to counter by killing Caesar. The plan backfired.

In many respects, the play as written portrays the tragedy of Brutus, the assassin, who in Act III is haunted by Caesar’s ghost and in the end himself is killed.

If the Public Theater portrayal, then, was intended to incite — I do not like to think it was — but if it was, then it sadly missed the historic implications and error of Brutus’ tragic actions.

Shakespeare’s message, clear as day, was to be careful what you wish for. This hits home in Act III, Scene 2, in the forum, after Marc Antony delivers his famous eulogy, and the Roman people consider his comments. After some discussion over whether the assassination was right or wrong, the third citizen counters — sagely — that “I fear there will a worse come in his place.”

This is a moment of dramatic irony, where the audience knows that it is the third citizen who was correct — Caesar’s death led directly, after some years, to the founding of the empire  — or at least, they are supposed know that. More on that in a moment.

Alternately, had the Senate instead worked with Caesar, would there ever have been the emperors? Obviously, there is no way to know for certain, but it is hard not to watch “Julius Caesar” — or other portrayals such as HBO’s “Rome” — and not conclude that the opposition to and assassination of Caesar played as much a role in the destruction of the republic as the civil wars they provoked.

As it turns out, these themes were apparently not lost on the production of the play, who in a statement on June 12 said, “Our production of ‘Julius Caesar’ in no way advocates violence towards anyone. Shakespeare’s play, and our production, make the opposite point: those who attempt to defend democracy by undemocratic means pay a terrible price and destroy the very thing they are fighting to save. For over 400 years, Shakespeare’s play has told this story and we are proud to be telling it again in Central Park.”

How horrified, then, the production must have been with how its performance was received — and portrayed in mainstream media outlets in a 30-second clip that millions more saw and then reacted to — as focused solely on the imagery of Trump’s assassination.

The Public Theater would have never had to issue such a statement in London in Shakespeare’s time, but then again, Shakespeare in his right mind would have never, ever portrayed Caesar as Queen Elizabeth whilst she was on the throne. By dressing Caesar up as Trump, the play became a perversion, a parody, even, of Shakespeare’s stark warning against political violence.

If the intent was not to incite, the portrayal was surely folly. Days later, U.S. Rep. Steve Scalise was shot. By then, all pretense of admonishing political violence was lost in the spectacle. Protestors attempted to stop the production and denounce the violence. “The blood of Steve Scalise is on your hands!” Laura Loomer shouted as she took to the stage before being removed.

All at once, Public Theater’s play was timely, clever and yet obscenely ill-considered and provocative since, nationally, the only message that got through was that of assassinating Trump. The subsequent shooting of Scalise, coupled with comedian Kathy Griffin’s prior depiction of decapitating Trump, only cemented public attitudes against these acts.

In a manner, then, the Public Theater succeeded — although not for the reasons it intended — for now the public has roundly rejected the violence.

But not all have deplored the violence or will. The ever-present struggle in republican forms of government historically has been to keep the beast of political violence in its cage. Unfortunately, Public Theater’s production has been viewed as a symbolic call to arms for Trump’s opponents to take matters into their own hands, celebrating the violence and inciting it. The production should have anticipated such a response.

Even if the play Shakespeare wrote was originally supposed to deplore such acts, this modern iteration was beyond the pale. It was not Antony’s eulogy or the Romans in the forum running on the nightly news, it was the spectacle of the assassination of the sitting president. If it bleeds, it leads.

Which raises perhaps a greater problem, where many Americans appear not to be aware or appreciate that extreme acts — for example, relying on the Justice Department and intelligence agencies to depose Trump with fictions of Russia collusion in undemocratic fashion — might lead, as the third Roman citizen warned, “a worse [to] come in his place.”

Republics, at their core, are fragile things. To survive, the freedom from political violence must be maintained. The peaceful transfer of power respected. How horrific, then, it is to watch as even warnings against such violence, like Shakespeare’s magnificent play, have now been perverted to play the role of the inciter.

As the Bard wisely warns via Antony in the eulogy, “The evil that men do lives after them.” Have we, as a society, forgotten this historical truth?