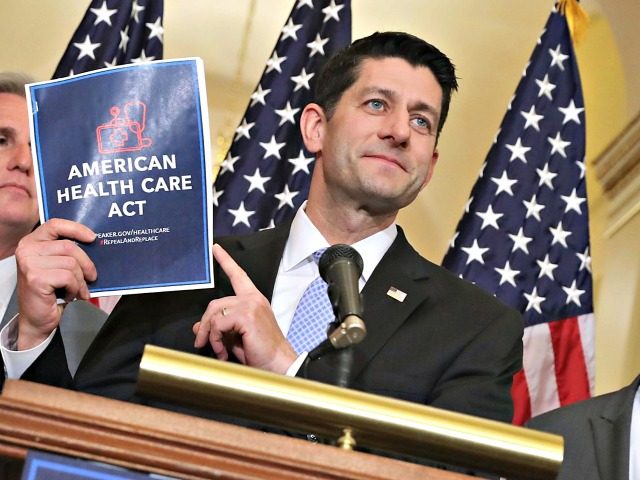 “What I tell people at home is I think we can get 85 percent of this, for sure, repealed in reconciliation.”

That was then-U.S. Rep. Paul Ryan (R-Wis.), prior to his tenure as Speaker of the House of Representatives, on the Mark Levin Show national radio program on July 11, 2012, outlining House Republicans’ plan to repeal almost all of the health care law via the budget reconciliation process.

“All the Medicare policy, all the Medicaid funding, all the Obamacare exchange subsidies, that’s fiscal, that’s spending — taxing and spending.  All of that can go into reconciliation, which has always been our plan. It is our plan,” Ryan promised.

In 2015, House Republicans set the floor for what such a repeal would look like in H.R. 3762, legislation that included ending Medicaid expansion, premium subsidies, cost-sharing subsidies, the individual and employer mandates, reinsurance, risk corridors and risk-adjustment, and the taxes and spending from the health care law. But not the insurance regulations.

That bill passed both houses of Congress and was vetoed by former President Barack Obama in early 2016. If it was good enough for Obama to veto, one might question why it was not good enough for President Donald Trump to sign in 2017.

Fast forward to today’s proposal to replace Obamacare, and it does not do all of these things.

While the bill does appear to end the individual and employer mandates, it replaces the individual mandate with a “continuous coverage” penalty that insurance companies can charge, something Sen. Rand Paul (R-Ky.) had warned about.

Sen. Paul was correct as it turned out. As reported by Kaiser Health News, the “continuous coverage” penalty “increases premiums for people who buy insurance if they have gone 63 consecutive days without a policy during the past 12 months. Their premiums would rise by 30 percent and that surcharge would last for a year.”

So, the Republican plan to lower premiums, is to increase them?

Even if you had only lapsed coverage for, say, 64 days — one day more than the provision’s cutoff — you would owe the increased premiums for an entire year. Like the individual mandate, those who may be least able to afford health coverage, for example those who lose their jobs and are out of the health care market for a while, are the ones who are penalized for not keeping coverage. And unlike the individual mandate, there is no hardship exemption.

Does that make sense?

“The continuous coverage provision alone should be reason enough for Republicans to go back to the drawing board with this bill,” Americans for Limited Government President Rick Manning said in a statement.

“Republicans promised to end the tyranny of the individual mandate but instead, House Speaker Paul Ryan has made it worse, by punishing those who lose their coverage because they lost their job or discontinued it because premiums got too high. This massive increase has a perverse effect of making it harder to get health insurance for those who drop for whatever reason, by hiking premiums of those who attempt to reenter the insurance market by 30 percent as a matter of law. This is unbelievably bad,” Manning explained.

“The House needs to stop what they are doing this instant and start over,” Manning exclaimed.

There are other problems. The bill doesn’t eliminate the additional federal funding for Medicaid expansion that was enacted in Obamacare.

Making matters worse, nobody apparently checked with the Senate parliamentarian Elizabeth MacDonough, who has served since Feb. 2012, to see if the insurance regulations — ordering basic plans to cover more than they might otherwise — could be included in the budget reconciliation bill, according to Sen. Mike Lee speaking with the Washington Examiner’s Philip Klein.

“What I understood her to be saying is that there’s no reason why an Obamacare repeal bill necessarily could not have provisions repealing the health insurance regulations,” Lee said in the interview.

According to the story, “Lee also said that the parliamentarian told him it wasn’t until very recently, after the unveiling of the House bill, that any Republican even asked her about the possibility of repealing regulations with a simple majority.”

Consider that. The whole reason House Republicans have been told they could not address the insurance regulations is because the Senate budget rules would not allow it.

But did anyone ever check? MacDonough has been there for over five years now.

Perhaps Ryan’s plan to repeal 85 percent of Obamacare via reconciliation in 2012 was actually too low.

The legislation appears to replace exchange plan subsidies with a regime of tax credits — which will cost $70 billion a year once fully implemented according to the Congressional Budget Office — the exchanges themselves remain in place. The plan also subsidizes a national, catastrophic-only insurance plan.

Yet, if the plan had contemplated eliminating insurance regulations and, say, going across state lines to buy insurance, would anyone be talking about new federal subsidies for health insurance?

In other words, it would appear the entire new scheme of health insurance has been designed based on what Ryan thought he could get through on reconciliation. The plan tacitly acknowledges that costs will not be coming down, and so envisions subsidies via tax credits.

This is the problem. Because Ryan and Republican leaders are constraining themselves to what they think can be accomplished under Senate reconciliation budget rules, they are delivering a mutant national health care system. Just pass the bill you want, and if the Senate parliamentarian objects, overrule her, the same way they plan on overriding any filibuster on Neil Gorsuch for the Supreme Court.

Enough with the excuses. If Senate rules prevent good legislation from being proposed, then override those rules.