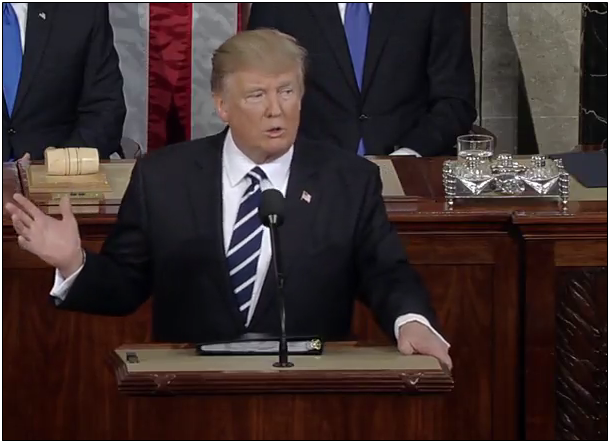 President Donald Trump grabbed Congress and the nation in a stirring one hour of must-see television, delivering an optimistic vision of America’s future, while recognizing the problems that threaten that very future.

Americans heard something from this president that they have longed to hear from their leaders from either political party when he emphatically declared, “My job is not to represent the world, my job is to represent the United States of America.”

With those simple eighteen words, Donald J. Trump defined his administration’s mission statement — to put American interests first, rather than giving away our national interest as a guilt offering for being the greatest, freest nation that the world has known.

The refreshing notion of embracing our nation’s historic freedoms and the pathway we’ve taken to broaden those freedoms, and recognizing that our best days can be ahead of us if we free our people from the shackles of government reminded how far we have fallen from that hope over the past eight years.

President Trump mentioned but did not dwell on his executive actions designed to unwind many of the pen and phone mistakes of the previous administration instead opting to look to the future and call on both parties to work together to find solutions built upon common ground principles.

While many in his place would have been tempted to make a long-winded case for tax reform and budget cuts, the President made a compelling case for corporate tax cuts based around a populist premise that we need to make it competitive to build things in America again so our workers are getting paychecks in those factories.

As a fiscal conservative, the multiple spending plans that inevitably emerge from these speeches is cause for some angst as our nation faces a $20 trillion debt crisis exacerbated by a decade where the debt grew by $11.5 trillion since September 30, 2006. At the same time, our nation suffered the worst Gross Domestic Product (GDP) in history, including the Great Depression.

Tackling this debt fueled emergency will likely be the greatest challenge of the Trump presidency, but the salve over the concern that the President did not mention this $20 trillion challenge is that the policies he outlined on trade, taxes, deregulation, education, and immigration are many of the solutions to that very problem.  Making America and Americans prosperous again is fundamental in ending the 60-year streak of increasing the national debt and turning the corner toward fiscal sanity.

Donald Trump gave a message of unity. One where he honestly reached out to Americans of all races,  religions and political parties to come together to bind our wounds and rebuild hope in depressed rural areas to cities like Chicago, Detroit and Baltimore — a hope not dependent upon government, but instead built on opportunity, safe neighborhoods and education choice to break the chains of broken schools.

Unity around the hope that a young woman with a rare terminal disease whose father’s love led to the discovery of a cure that has her attending the University of Notre Dame.

Unity around a widow of fallen Navy Seal William Ryan Owens killed in a raid that provided intelligence which will help us win the war against Islamic terrorism around the world.  A young woman whose pain and sacrifice was visible for all to see in a heart wrenching minutes-long standing ovation from Congress and the president himself.

Many Americans have only seen Donald Trump through Saturday Night Live satires, malicious Internet memes and reporting that creates controversy where none should exist, but for one hour, they saw a man dedicated to his country, determined to fight for America and its people.

As Fox News reporter Chris Wallace put it, “I feel tonight that Donald Trump became the President of the United States.”

Now it is time to roll up our sleeves and turn the rhetoric into action. President Donald Trump has pointed the way, now the people need to lead Congress to take the path to making America great again.