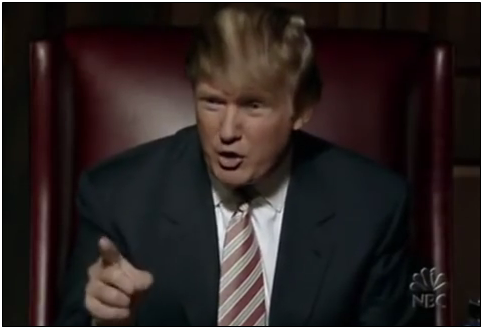 Republican presidential candidates the past many years have spoken of plans to reduce the federal workforce and rein in the bureaucracy in Washington, D.C. Rudy Giuliani in 2008 planned to do so by simply not rehiring workers to replace the retiring Baby Boomers, a proposal that was adopted by John McCain the same year and Mitt Romney again in 2012. President-elect Donald Trump once again adopted the hiring freeze this year in his successful bid to win the presidency via “Donald Trump’s Contract with the American Voter,” promising to “to reduce the federal workforce through attrition.”

Now Trump will have the opportunity to finally put that plan into motion and to dust off his famous slogan from NBC’s The Apprentice: “You’re fired.”

Because there is another more practical, political problem for Trump, and that is that after 8 years, the current 1.3 million non-defense civilian federal workforce is currently staffed with loyalists to President Barack Obama, who may not wish to implement Trump administration policies and may even seek to undermine the President-elect.

On his way out, Obama created an avenue for a small number of political appointees to rehired on the career side to burrow them into the workforce — called conversions. He also changed civil service rules to make it easier to hire federal employees outside of the traditional http://USAjobs.gov system. So, how to drain the swamp?

Federal rules make it extremely difficult to fire anybody in the civil service, a process that can take up to two years, even when there is cause like, say, only showing up to work one-third of the time. The federal employee unions get involved, and the whole thing is a mess. That said, federal managers attempting to deal with problem employees had best get started on day one. But one additional step that could be taken would be to reform civil service laws to make it easier to fire career federal employees, legislation that would need to be taken up by Congress, such as proposed by U.S. Rep. Jason Chaffetz (R-Utah) likely to cause a major fight.

Another idea is to incentivize early retirement through financially lucrative, limited-time-only buy-outs. This would be accomplished via a one-time appropriation by Congress in the next continuing resolution — due on April 28, 2017 — reducing the amount of time served and the eligible retirement age on a temporary basis. The program could be administered by the Office of Personnel Management, with enough funds to facilitate the buy-outs, which would need to be big enough to promote early retirement.

More immediately, in the next continuing resolution, Congress could simply defund the personnel budgets of non-defense civilian departments and agencies, forcing an immediate 10 to 20 percent reduction in the workforce. Specifically, this would be done by taking last year’s enacted full-time equivalent number for each department, agency and office, and then cutting it by 10 to 20 percent. Also, it would be necessary to defund existing preferences under federal rules being given to those laid off being later rehired on a first-in-line basis. This latter part is essential, because otherwise, the Obama personnel who were just laid off will be the first to be rehired when positions need to be filled.

That would lay off anywhere from 100,000 to 200,000 federal employees. If it becomes necessary to refill certain positions, that can be dealt with later — with non-Obama personnel. But first things first, let’s start out from a point of reduction, truly limiting the size of the government via personnel.

Federal regulations, called Reduction in Force at 5 CFR Part 351, generally dictate a last-in, first-out seniority system when it comes to layoffs. The last federal employees who were hired were by Obama. A 10 to 20 percent reduction of the federal workforce then would naturally hit Obama’s hires the hardest. This too would be a major fight, but tied to the continuing resolution, the continued funding of the non-essential portions of the government would be at stake, giving Republicans in Congress the leverage they need to prevail, provided they are willing to get tough.

Congressional Democrats would likely attempt to force a government shutdown over any changes to the civil service via the April funding bill, particularly anything reducing the workforce on a mandatory basis and preempting the possibility of Obama personnel being rehired during a Trump administration. Indeed, Senate Democrats are likely to force a shutdown in the April funding bill no matter what it contains in order to test the new President’s resolve and that of House and Senate leaders. Such a shutdown would be unsurprising, as it will be one of the few tactics available to Democrats whilst in the minority in the House and the Senate to stop Republican policies. To which, there is a simple solution: No back-pay for federal employees after the shutdown ends.

Usually, after government shutdowns, non-essential personnel can expect to receive back-pay, essentially a paid vacation for their troubles during the shutdown. So, simply issue a warning that there will be no back-pay during the ensuing government shutdown, and suddenly the federal workforce, if not the unions whose job it is to protect those who have been there the longest, will be the biggest advocates of ending the shutdown immediately — even if it ultimately means an across-the-board reduction of the workforce. Self-preservation would kick in just from a monthly cashflow basis for most employees who have bills to pay.

Much of the workforce lives in Maryland, Virginia and the District of Columbia anyway, all of which voted for Hillary Clinton. If there is no back-pay during the ensuing government shutdown, Democrats using the shutdown tactic to forestall inevitable federal workforce reductions would only be punishing their own voting constituencies instead of protecting 80 to 90 percent of them from a cessation of pay.

Nobody in the federal government is entitled to their jobs, and with a Republican president, government shutdowns should no longer be leverage used to enact Democratic policies or to protect government employee constituencies. No back-pay during government shutdowns would take away leverage Democrats usually wield. This would increase the likelihood of success in a fight over the civil service issue, and critically, once Democrats capitulate, over any other issue in future policy-based funding battles in continuing resolutions and omnibus spending bills, like Obamacare.

It’s time to play hardball. If the Trump administration wants to be able to enact the President-elect’s agenda in the relatively short time that is available, the biggest obstacle may not be Congress. There are problems there to be sorted out, to be sure. The biggest problem will be with the federal workforce itself, leaking to the press like a sieve and undermining the administration at every turn.

In this case, hiring freezes, early retirements and a big, real cut in the size of the workforce should be the first order of business by the Trump administration to truly drain the swamp.