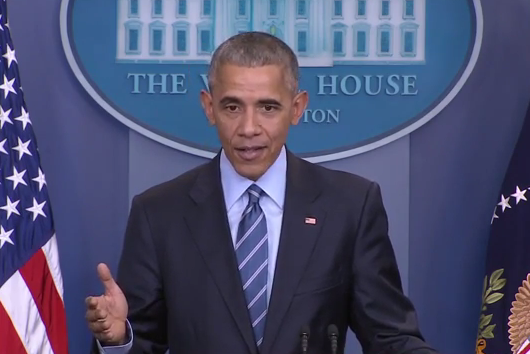 “I think there is no doubt that when any foreign government tries to impact the integrity of our elections that we need to take action. And we will, at a time and place of our own choosing.”

That was President Barack Obama on NPR radio on Dec. 15, outright questioning the integrity of the presidential election — which President-elect Donald Trump won on Nov. 8.

Obama’s tone differed drastically from his conciliatory speech on Nov. 9 after Trump won when he said, “I have instructed my team to follow the example that President Bush’s team set eight years ago, and work as hard as we can to make sure that this is a successful transition for the President-elect — because we are now all rooting for his success in uniting and leading the country. The peaceful transition of power is one of the hallmarks of our democracy. And over the next few months, we are going to show that to the world.”

Obama added, “we all go forward, with a presumption of good faith in our fellow citizens — because that presumption of good faith is essential to a vibrant and functioning democracy. That’s how this country has moved forward for 240 years. It’s how we’ve pushed boundaries and promoted freedom around the world. That’s how we’ve expanded the rights of our founding to reach all of our citizens. It’s how we have come this far.”

So, on Nov. 9, the presumption of good faith was essential to our democracy but now, suddenly, the integrity of the elections is in question.

Really, based on what new information? The CIA assessment revealed in the Washington Post on Dec. 9 appears to rely on information from June that, frankly, draws no link between supposed Russian government hackers and email disclosures by Wikileaks of Democratic National Committee (DNC) and John Podesta emails having originated.

One primary reason it couldn’t draw such a link is those emails were not revealed until July and October, respectively — and so information from a separate incident at the DNC revealed in June was not necessarily helpful or even related to the Wikileaks disclosures.

But lest there was any doubt, on Nov. 17, National Intelligence Director James Clapper, testified to the House Intelligence Committee that, “As far as the WikiLeaks connection, the evidence there is not as strong and we don’t have good insight into the sequencing of the releases or when the data may have been provided.”

In other words, as recently as a month ago, the nation’s intelligence community could not show where Wikileaks got its emails from. The evidence is not strong. In addition, Wikileaks itself has said it was not a hack, it was a leak from an insider who had legal access to the information, which is now being corroborated by a group of intelligence veterans led by former National Security Agency official and whistleblower William Binney.

Binney’s group notes that “The various ways in which usually anonymous spokespeople for U.S. intelligence agencies are equivocating – saying things like ‘our best guess’ or ‘our opinion’ or ‘our estimate’ etc. – shows that the emails alleged to have been ‘hacked’ cannot be traced across the network. Given NSA’s extensive trace capability, we conclude that DNC and HRC servers alleged to have been hacked were, in fact, not hacked. The evidence that should be there is absent; otherwise, it would surely be brought forward, since this could be done without any danger to sources and methods. Thus, we conclude that the emails were leaked by an insider – as was the case with Edward Snowden and Chelsea Manning. Such an insider could be anyone in a government department or agency with access to NSA databases, or perhaps someone within the DNC.”

In other words, if the link between Wikileaks and Russia could be made definitively, it would have been done by now. It hasn’t.

Furthermore, there has been zero allegation being made by intelligence agencies that election ballots and their tabulation were somehow tampered with on Nov. 8. Jill Stein tried to get this into court with no evidence in Pennsylvania, U.S. District Judge Paul Diamond shot it down, writing, “Most importantly, there is no credible evidence that any ‘hack’ occurred, and compelling evidence that Pennsylvania’s voting system was not in any way compromised.” Stein’s original petition, Diamond noted, “did not include any allegation that hacking had actually occurred.”

In Michigan, which Trump also won, the ballot system is all-paper. You can’t hack paper.

Something Obama acknowledged at his year-end Dec. 16 press conference, saying, “We’ve not seen evidence of machines being tampered with.”

Therefore, it is disgraceful for the outgoing President to unleash the U.S. national security and intelligence apparatus the way he did with this CIA assessment, on the eve of the Electoral College vote on Dec. 19, calling into question whether the elections were fairly decided.

Adding insult to injury, in his Dec. 16 news conference, Obama had the gall to suggest that before the election, the administration did not want to question the integrity of the election, saying, “at that time, we did not attribute motives” to what it said was hacking.

Didn’t attribute motives? Who’s Obama kidding? When the Department of Homeland Security and the U.S. Intelligence did its statement on supposed Russian origins of Wikileaks’ disclosures on Oct. 7, it said explicitly what the alleged motive was: “These thefts and disclosures are intended to interfere with the U.S. election process. Such activity is not new to Moscow — the Russians have used similar tactics and techniques across Europe and Eurasia, for example, to influence public opinion there. We believe, based on the scope and sensitivity of these efforts, that only Russia’s senior-most officials could have authorized these activities.”

Russia was, the government said in October, intending to interfere with the elections and influence public opinion and that it went all the way to the top of the Russia’s government. This was used by the Clinton campaign to wrongly portray Trump as a puppet of Russia.

If Russia crossed the threshold of influencing the election, then so did Obama and the intelligence community with these assessments. And now they’re doing it again.

This could all be designed to sabotage Trump’s efforts to repair U.S.-Russian relations over Syria and Ukraine, something he campaigned on, by creating doubts as to Trump’s loyalties.

Consider that at the press conference, Obama complained that “Some of the people who historically have been very critical of me for engaging with the Russians and having conversations with them also endorsed the President-elect, even as he was saying that we should stop sanctioning Russia and being tough on them, and work together with them against our common enemies… That wasn’t news.  The President-elect during the campaign said so.  And some folks who had made a career out of being anti-Russian didn’t say anything about it.”

So, now, when Trump or Russia make any overtures, the media has been primed to automatically portray it as a payoff for the supposed hacks, proof that Trump was a Russian agent all along, even if the effort is to actually an attempt to achieve concessions on nuclear weapons or cooperation in taking out Islamic State or anything else.

The intention could be to deter Trump from reaching out to Russia on any issues in the first place, or at least to undercut his foreign policy moving forward. Never in American history has an outgoing President set up such an environment to make it this difficult for his successor to govern on the policy in which he campaigned and won on — and used the intelligence community to do it. The damage Obama has done here should not be discounted.

In the meantime, Obama sounded a lot less sure of himself in the press conference about the evidence of Russia’s intervention, offering this caveat about the intelligence assessments: “One of the problems with the Internet and cyber issues is that there’s not always a return address, and by the time you catch up to it, attributing what happened to a particular government can be difficult, not always provable in court even though our intelligence communities can make an assessment.”

Not always provable? Here, the President is indicating the U.S. government cannot prove that Russia was behind the supposed hacks — further deteriorating U.S.-Russian relations, which Trump promised to repair — but the administration felt okay with using the intelligence community both before the election that, per the Oct. 7 Department of Homeland Security statement, to declare unequivocally that, “The U.S. Intelligence Community (USIC) is confident that the Russian Government directed the recent compromises of e-mails from U.S. persons and institutions, including from U.S. political organizations.”

And now right before the Electoral College votes, via the CIA assessment, Obama has done it again, saying Russia was trying to help Trump all along. Based on what? Their best guess. So, it might have been Russia, but we can’t prove it, per Obama, so maybe not. They might have been trying to help out Trump. We don’t know. But we’re pretty sure. We can’t prove it. Thanks for clearing that up. Now he tells us.