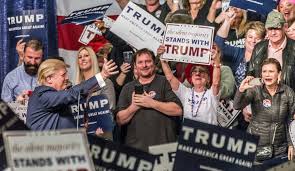 The alternative right or alt-right so-called “movement” has attempted to claim credit for the election of Donald Trump. Despite alt-right leaders constant support for the Trump administration, Trump has put distance between himself and them, and must maintain focus on the constituents who actually elected him to the presidency, millions of working class Americans nationwide.

The alt right movement has existed since 2008 and claims to represent “radical conservative movement defined by white nationalism and a fervent resistance to multiculturalism and globalism.” For alt-right leaders, such as Richard Spencer, Trump’s rise to power was a symbol of the imagined prominence of the alt-right which he somehow believes provided a back bone for Trump’s support.

In truth, this gives Spencer far more attention than he deserves.

In the meantime, back in reality, Trump has no reason to feel indebted to this group, and the media and liberal activists must stop pretending this group is somehow dominating the political arena. It is not.

A clear majority of the alt-right traffic is generated from websites such as Reddit and 4chan where users engage in discussions hidden behind their computer screens. Outside of the Internet world the “movement” seems to have little clout.

Trump created his own movement by reaching Americans across the nation by the millions and winning the highest elected position in the land. He owed the Republican nomination largely to primary voters in New Hampshire and South Carolina who gave him the momentum early in the campaign, and to union households among others in Pennsylvania, Ohio, Michigan and Wisconsin who helped put him over the top in the electoral college on Nov. 8.

Joel Kotkin, a Forbes contributor covering demographic and economic trends, explains just after the elections that Trump won because of his ability to garner the attention of swing state suburban voters. In crucial Midwest states, such as Michigan and Wisconsin, Trump could attract a population disgruntled by employment and wages. Even in the deeply blue state of Minnesota, Trump held significant support.

BBC exit poll analysis concluded that 42 percent of women voted for Trump as well as nearly 30 percent of Hispanics. It was this turnout too which assisted Trump in clinching the presidency in states such as Pennsylvania, Florida, Ohio, and Arizona.

Trumps largest support base was and is not the alt-right, but rather every day Americans focused on economic hardships since the dotcom bubble and financial crisis. Which makes sense, given that Trump’s entire campaign was based off removing identity politics from the political arena.

While the alt-right leaders praise identity politics, Trump has refuted their ideology, telling the New York Times on Nov. 22 that he will “disavow and condemn them,” also noting that he wished to avoid “energizing” the group in any way.

Trump has never had the goal of “whitening” the nation as alt-right movement leaders have suggested, but rather focusing on every day working American struggles, which is where his voting base of 60 million people derived from.

It is the American people who Trump owes his victory to, not the alt-right.

Alt-right did not get Trump elected nor is he their knight in shining armor. Rather, Trump represents the American dream regardless of race, color, religion, or gender. While alt-right isolates and rejects cultural inclusion, Trump’s true sentiments were clear the moment he accepted his position as President-elect.

In his victory speech early in the morning on Nov. 9, Trump declared leaving little doubt as to his intent: “It is time for us to come together as one united people. It’s time. I pledge to every citizen of our land that I will be president for all Americans, and this is so important to me.”

At this point, the only people promoting the idea that the alt-right had anything to do with Trump winning are the media and liberal activists, and that’s just wrong. This is a media creation. They’re not important. Don’t pay any more attention to them.