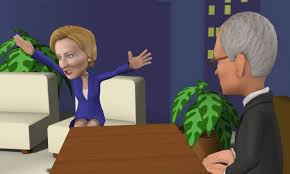 So says the campaign’s Labor Outreach Director Nikki Budzinski in a new Wikileaks email dated November 3, 2015 to campaign advisors that it was U.S. Rep. Eddie Bernice Johnson (D-Texas) who let the cat out of the bag. Budzinski was attempting to engage in damage control.

“She claimed in the meeting that she speaks with HRC 2-3 times a week and that she was told by the Secretary that the only reason she opposes [the Trans-Pacific Partnership] TPP is to get ‘labor off her back’ and that once she is elected President she will reverse position,” Budzinski complained.

Remember that other leaked speech where Clinton said she takes certain positions privately and others publicly? This is a case in point.

This disclosure comes after another leaked speech to Brazil-based Banco Itau in 2013, saying that her dream is the entire Western hemisphere without borders, open trade and a single economy.

“My dream is a hemispheric common market, with open trade and open borders, some time in the future with energy that is as green and sustainable as we can get it, powering growth and opportunity for every person in the hemisphere,” Clinton said.

In that speech, Clinton revealed what she really thinks about the critical issue increasing U.S. participation in trade deals once she’s talking with the corporate interests involved: “I think we have to have a concerted plan to increase trade already under the current circumstances… There is so much more we can do, there is a lot of low hanging fruit but businesses on both sides have to make it a priority and it’s not for governments to do but governments can either make it easy or make it hard and we have to resist, protectionism, other kinds of barriers to market access and to trade and I would like to see this get much more attention and be not just a policy for a year under president X or president Y but a consistent one.”

Is there any doubt? If Clinton is elected, then, we should expect that the Trans-Pacific Partnership will pass and will pass easily. She will sign it into law if it gets to her desk. Make no mistake.

Depending on how widely distributed this particular bit of information is, politically it could be devastating amid a Donald Trump surge in Rust Belt states Michigan, Pennsylvania and Ohio — where Trump has taking a strong stance against bad trade deals that do not have the best interests of the United States at heart.

Which, for union households that have traditionally voted Democrat, that means it’s choosing time. Vote for Clinton who has promised to betray them behind closed doors? Or vote for Trump who promises to be their champion on trade issues?

Why are they bad?

Since 2000, the year China entered the World Trade Organization and Congress granted it permanent normal trade relations, the U.S. has racked up more than $8.5 trillion in trade deficits, directly subtracted from the nation’s gross domestic product (GDP). If we had produced those goods here, U.S. GDP would be nearly $27 trillion, instead of today’s $18.4 trillion. Instead, the economy has not grown above an inflation-adjusted 4 percent since 2000 and not above 3 percent since 2005, the slowest economic growth since the Great Depression.

Since that time, the U.S. has been losing labor participation among 16 to 64 year olds, those in their prime working years, which has declined from more than a 77 percent rate at the turn of the century to just 72.6 percent in 2015, accounting for more than 10 million who either left the labor force or never entered on a net basis since then.

So was it job outsourcing?

In the meantime, countries we supposedly have “free trade” agreements with devalue their currencies in effect levy a major tariff on our goods and grant themselves a major discount on their goods shipped here. That’s not free trade, which is supposed to include reciprocal tariff reductions. It’s a one-way trade war.

The Oct. 2015 World Economic Outlook from the International Monetary Fund (IMF) study of 60 economies including China found that “A depreciation in an economy’s currency is typically associated with lower export prices paid by foreigners and higher domestic import prices, and these price changes, in turn, lead to a rise in exports and a decline in imports. Reflecting these channels, a 10 percent real effective exchange rate depreciation implies, on average, a 1.5 percent of GDP increase in real net exports,” which much of the increase happening in the first year.

This means that the more exporters, particularly China, have devalued their currencies in recent history — whether through fixed exchange rates or building up foreign exchange reserves or both — the more products they were able to export. As a result, while U.S. global manufacturing market share has been dropping, China’s global manufactures market share jumped from 4.67 percent in 2000 to 16.35 percent in 2014.

All of which Clinton won’t do a darn thing about.

It’s time for union households in Michigan, Pennsylvania and Ohio to wake up. Hillary Clinton is not with them on the trade issue. She is speaking to global interests, not U.S. interests. And if she is not punished now for her blatantly phony position, where she lies to her supporters’ faces, no one will ever be held accountable under her administration. She’ll have gotten in on a lie and she’ll know it.