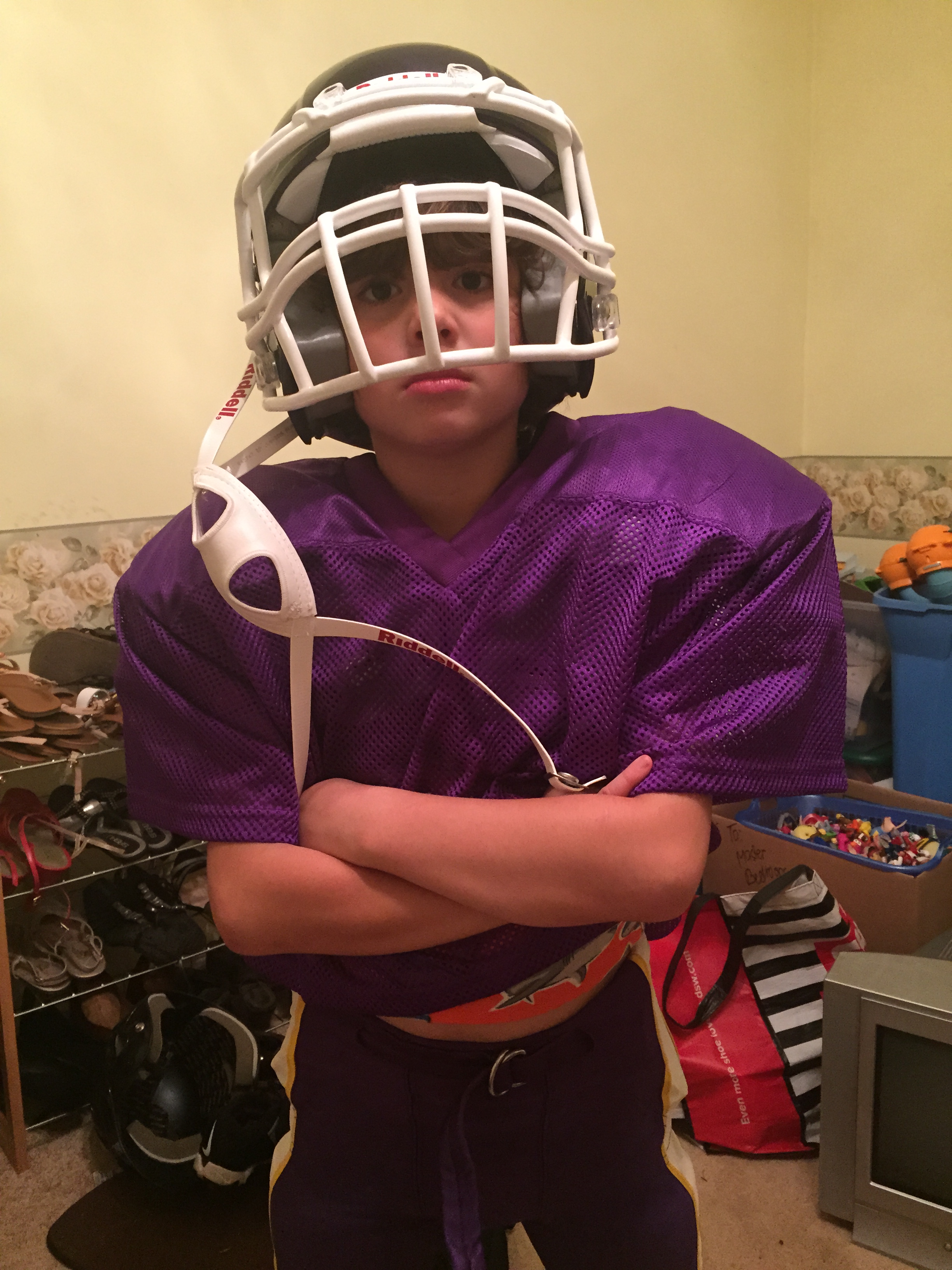 In the midst of perhaps the most volatile presidential election in the history of the United States – which is happening during the middle of the season of one of America’s greatest pastimes – it’s great (and rare) to find a kid who actually has a reasonable chance of being both president and a professional football player. Watch this video, which has all the hallmarks of going viral; it’s one of those children’s sport submissions where a grade schooler is terrifically tough in repeatedly whipping his opponent.

Mario Del Vecchio, an 8-year-old from Warwick, New York, as an offensive tackle, doesn’t just block his opponent. He muscles the defensive lineman completely out of the play. There’s no holding here. No penalties of any kind by the second grader. He just manhandles the other kid, one play after another. Here’s the two minute video – Del Vecchio is number 12 – it’s quite amazing.

“I wasn’t the star of the game,” Del Vecchio said in not acknowledging his feats, “John Marciano and Joey Tuhy scored the touchdowns. John really had two, but one got called back.” Warwick won the game, 13 -12, over Pine Bush.

When asked how he learned to block with such power, Del Vecchio spoke with the class of a professional (or a kid, depending how you look at it), saying, “I didn’t know I could block like that. Right before half time, my dad told me to keep staying on the defensive end, not let him get past me. So I listened to him and it worked. Also, I watch our center Michael Caselli. He doesn’t know I watch him, but I do. He’s an older kid, he’s in fourth grade. He’s real good.”

So, if Empire State News had a Youth Sports Player of the Month, Mario Del Vecchio would definitely be it. Oddly, however, if we had Youth Academic of the Month, he would also be it. When we interviewed Del Vecchio after watching the video, we learned that he has a photographic memory and, more so, he’s a little political genius. Not only can this child name more of the presidential candidates than most 50-year-old adults, he ripped off the ten states with the highest number of electoral college votes—in order. What adults can even name the top three?

But Del Vecchio said, “You only want the top ten? California, Texas, Florida and New York are tied, Pennsylvania and Illinois are tied, then Ohio, then Michigan and Georgia are tied, then North Carolina, then New Jersey, where I used to live.”

Without taking a breath, he quipped, “I thought we were talking about football. Want to know the names of all the kids on my team? I already told you three of them. Here’s the rest of them: Marco Green, Zack Kantor, Anthony Mazza, Jack Willer, Joey Storms, AJ Kantor, Kevin Cushing, Luke Beattie, Kyle Bolich, Max Wickrath, Isaiah Pagan, Christian Perron, Elijah Tuechler, Danny Pittaluga, and Rashied Richardson.”

Then he told us he had to get off the phone because he wanted to play Pokemon.

Mario Del Vecchio’s abilities shouldn’t come as any surprise. He’s the son of one of New York’s true power couples. A husband and wife who don’t come from any family money but nonetheless have made themselves into a great success story team. Del Vecchio’s mother, Francine, is a professor of education at Caldwell University, having earned her doctorate from an Ivy League school (Columbia University’s Teachers College). She has co-written multiple screenplays with her husband that he has produced into star-studded movies. Del Vecchio’s dad, Kenneth, is no stranger to Empire State News. We have cited him on many occasions in legal and political contexts, and have chronicled his Renaissance Man accomplishments. The elder Del Vecchio is an acclaimed filmmaker, having written/directed/produced over 30 movies that star several Academy Award and Emmy winners and nominees. He’s also a best-selling novelist, the author of some of the nation’s best-selling legal books, and chairman of Hoboken International Film Festival (one of the world’s largest). Additionally, he’s a former judge and an attorney who has tried hundreds of cases. What many people don’t know about him is that he is also incredibly physically strong. At one point, he was one of the country’s top bench-pressers in his weight class (bench pressing 450 pounds, but weighing just 175 pounds). Check out this video with TV guest appearance clips where he is bench pressing some crazy amount of weight and a news host says,

Well, it looks like people won’t want to mess with Mario – the Renaissance Boy – either.