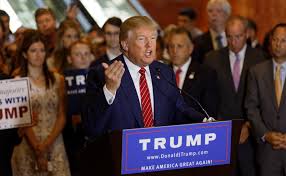 Hillary Clinton has falsely called Donald Trump a racist. She has claimed that he is not concerned with the plight of America’s urban communities. Trump, the GOP presidential nominee, however, has a spent a considerable portion of his professional life – and millions of dollars – bettering the lives of urban area residents. Just see what he has done for Manhattan’s real estate market, and those work and live there.

The Republican National Committee, New York Republican Party, and the Trump presidential campaign are now working together in an effort to get more people involved in from urban areas, according to a press release issued by New York Republican State Committee. Earlier this week, Donald Trump met with the Empire State’s Republican Leadership Initiative (“RLI”), to further this agenda, as well as other mechanisms to foster victory for Trump and fellow Republicans in New York.

Statewide GOP Chairman Edward Cox stated: “Along with the Trump campaign and Republican National Party, the RLI fellows will spread our message of strong Republican principles like a pro-growth economy, school choice and safe streets that will transform inner-cities. We will continue working with the Trump campaign and our national partners to spread this message to all voters, regardless of Party affiliation that there is a better way.”