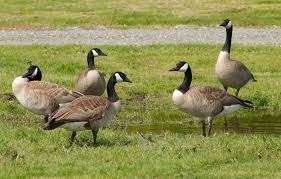 The mid-Hudson’s embattled city, Middletown, suffers from varied degrees of poverty, crime at different levels, and from being a municipality that suddenly has very little to attract people into its community. But it does attract geese, and these smarmy little animals can now be added to Middletown’s list of problems.

The grayish/white/black, long-necked birds have apparently infiltrated the city’s parks, joining some random homeless people, critters and mites of mixed sorts, and scattered debris. The latter nefarious sorts may be what’s attracting the birds. Middletown officials, in multi-colored tattered capes and hats, are coming to the rescue, though. Not for the geese. Not for the critters, mites, and vagrants. But for some generic good, because they fear that the goose population is devastating to the supposed cleanliness of the Middletown parks. More so, it is feared that goose droppings may be a serious threat in spreading the parasite giardia and the E. coli bacteria. As an effort to stop all this potential goose terror, the city has effectuated its own droppings, specifically by dropping a payment to the Geese Police.

Yes, the Geese Police. Middletown’s council has approved a nearly $6,500 fee to be delivered to the Tri-State Geese Police. This Pennsylvania company will unleash another animal – dogs – into the beleaguered bowels of Middletown to stomp out the geese and their excrement. Border collies, trained to scare geese, will be joined by handlers multiple times weekly to carry out this all-important duty. Never fear, however, these dogs are not trained to kill or injure the geese. More so, they apparently won’t even touch the birds. Instead, their genetics lead them to track and herd the geese, scuttling the somewhat-flying creatures from the parks.

Through the Geese Police, Middletown might just take one step away from its plight of dung. But does the city really want to eliminate perhaps its greatest attraction? With not much else to currently do in the city, why not visit the parks and these fine-feathered friends? They are kind of cute…