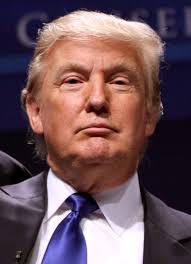 On December 16 of last year, Assemblyman DiPietro emailed me, asking that I join the Trump team. I immediately responded affirmatively, as I had already endorsed Trump’s presidential candidacy. A few weeks later, on January 7, DiPietro formally notified me, on behalf of the Trump campaign, that I was appointed the New York Congressional District 18 Chairman for the Trump campaign. Specifically, DiPietro emailed me, saying, “You are Chairman of your County/Congressional District.” I, of course, accepted, and have since been serving as Donald Trump’s District 18 Chairman, doing all that I can to procure a huge win for him in the Hudson Valley.

This week, I appeared on Fox News Channel’s “Fox & Friends”, defending against the silly notion that Donald Trump has a problem with women; the reality is that women like this man and, as we get to the general election, female constituents will vote for Trump en masse, given that he has great cross-over effect. On this same show, I also scoffed at the notion that Trump will be saddled with a brokered convention that he could lose; the GOP will disintegrate if the voters are disenfranchised through a fixed, establishment-boss-controlled convention. A great majority of Republican voters would depart from the Grand Old Party if such a blatant disregard of their will occurred. Here is a segment of my appearance on “Fox & Friends” earlier this week.

I also recently authored an op-ed article, wherein I dismantled the argument that Trump’s campaign manager, Corey Lewandowski, is guilty of a battery against former Breitbart News reporter Michelle Fields (see article here). Simply, no criminal offense occurred and it is a massive injustice that this man may be prosecuted for no reason, except that some people are jealous of Trump and his appeal to mainstream Americans. Trump’s unwavering support for Lewandowski in this matter is exactly what exhilarates his supporters: he’s loyal. The last line of my first novel, Pride & Loyalty, is “You can’t be loyal to everyone at once, because then you’re loyal to no one at all.” That’s the definition of loyalty. You can’t be everyone’s best friend. You have to pick and choose. This type of thinking that is embedded in me is why I elected to endorse Donald Trump well before the vast majority of others in the political, legal, and entertainment industries. This type of thinking is also obviously embedded in Trump. He’s loyal to the people close to him – and he’s loyal to Americans.

During every speech – and I’ve performed over 100 in the past few months – I have spoken extensively about the gutsy and smart Trump platform. The elimination of certain unconstitutional regulatory agencies that inhibit American operated businesses. Intelligent trade reform. Destroying terrorists. Building the wall and stomping out illegal immigration. Repealing Obamacare and the Iran Nuclear Deal. Trumpeting capitalism and thwarting the Obama/Clinton socialist agenda. I’m quite proud that my efforts have led to many in New York’s District 18 – and many in my industries – supporting Donald Trump. And now I would like to welcome the support of the four GOP county chairmen in District 18 – Mike McCormack (Dutchess County), Doug Colety (Westchester County), Anthony Scannapieco (Putnam County), and Courtney Greene (Orange County) – who have chosen to endorse Mr. Trump. Their coming on board shows that our message has resonated in every type of political circle in this district.

No doubt, my efforts – and the efforts of all those part of the Trump team – have and will continue to have a meaningful impact in getting him the party nomination. However, I’m mindful of the fact not to give myself nor any of us too much of the credit. And that’s because it’s Donald Trump himself who deserves the greatest credit for his prosperity in his campaign. He’s the man who decided to take himself out of an incredibly successful and comfortable business/entertainment empire and put himself in the direct fire pit of the ultra-liberal media, old school Republican establishment, and a monstrous gaggle of social media-minded buffoons. After weeding – and punching – his way through these mental midgets, Trump has so very effectively delivered his message to the masses of disillusioned voters who want to see America become great again. That said, I look forward to a great ass-kicking by Donald Trump in District 18, the entirety of the New York primary, and at the GOP convention this summer.