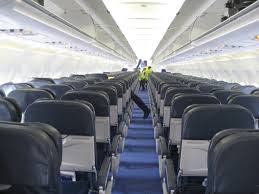 U.S. Senator Charles E. Schumer today said that the upcoming Federal Aviation Authority (FAA) Reauthorization bill in Congress must include language requiring the FAA to set minimum seat size standards for airplanes. Schumer says that for years now airlines have been slowly cutting inches off legroom and seat width. Despite record airline profits, Schumer noted that, over the past number of years the amount of legroom and seat width onboard airplanes has significantly shrunk, making air travel uncomfortable for many passengers.

“When talking to travelers, the number one complaint I hear is shrinking legroom and cramped seats,” said U.S. Senator Charles Schumer. “Consumers are tired of being packed into airplanes like sardines, and so, it’s time for the FAA to step up and stop this deep-seated problem from continuing. It’s no secret that airlines are looking for more ways to cut costs but they shouldn’t be cutting inches of legroom and seat width in the process. It’s just plain unfair that a person gets charged for extra inches that were once standard. To boot, the airlines are cruising on record profits, all while hundreds of passengers are crammed into smaller and smaller seats with less and less legroom. Requiring a standard for seat size and legroom should be a top legislative priority ahead of the upcoming FAA Reauthorization bill and I will work hard to make that case.”

The current FAA authorization is set to expire on March 31, and Congress must pass legislation to reauthorize the agency before that date. Schumer said now is the time to try and return lost inches to airline fliers. He said that such a requirement would prevent airlines from continuing to cram passengers and shrink space onboard airplanes in the future.

Schumer also said that the airline revenue-generating tactic of charging for ‘extra’ legroom represents a clear sign that the inch-cutting has gone on far too long. With inches now equating to big dollars that have helped deliver even bigger profits for airlines, Schumer says a minimum standard is both fair and timely. A minimum seat and pitch size standard should be made with the input of experts and consumers and based on science, passenger health, and safety, not only the maximum number of people that can be crammed into one plane, Schumer added.

Currently, there are no federal limits on how close together an airline’s row of seats ​can be or how wide an airline’s seat must be; ​there are federal requirements for exit rows, but not for other parts of the aircraft. Each airline’s measurements can be different. Over the last couple of decades, the average seat pitch—a measurement of distance between one point on a seat and the same point on the seat behind—has been shrinking. According to a report published by Fortune, the average seat pitch has decreased from 35 inches in the 1970s to approximately 31 inches today. Schumer worries that without action, more inches could be cut and more passengers crammed and that now is the time to sound the alarm on shrinking seats.

Schumer is pushing to include language in the upcoming FAA Reauthorization Bill that would finally require the FAA to establish minimum seat and seat pitch size standards. Schumer explained that a requirement is needed to prevent seat sizes and legroom space from shrinking even further.