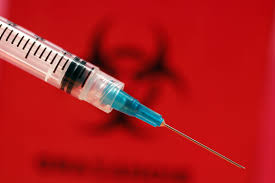 Baum, a licensed practical nurse who worked at the hospice ward of the Veterans Affairs Medical Center (VAMC) in Albany, improperly accessed syringes that contained oxycodone hydrochloride. These syringes were stored in locked containers, which Baum was able to access using his individually assigned password. Between April 8, 2014 and May 16, 2014, Baum removed the oxycodone hydrochloride from at least 25 syringes and replaced it with haloperidol.

Oxycodone hydrochloride, a Schedule II controlled substance, is a highly addictive narcotic analgesic used to treat moderate to severe pain and is to be prescribed only when medically required. Haloperidol, often marketed as Haldol, is an anti-psychotic medication used to treat certain mental/mood disorders and to treat uncontrolled movements or agitation.

“To satisfy his addiction, the defendant stole pain medicine intended for veterans in hospice care and tried to hide his crime by replacing that medicine with anti-psychotic medicine that would not have eased their pain” stated U.S. Attorney Richard S. Hartunian. “In committing this terrible crime, Baum betrayed his patients and their loved ones, the nursing profession, and the Department of Veterans Affairs.”