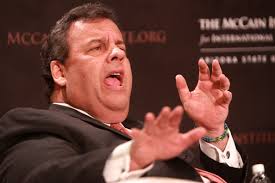 In Thursday evening’s Republican debate on Fox Business Channel, Florida Senator Marco Rubio called Chris Christie out on numerous issues where the New Jersey governor has shown himself to be left of center – and some cases far left. Christie donated personally to Planned Parenthood. He stated support for ultra-liberal U.S. Supreme Court Justice Sonia Sotomayor’s nomination. He has been a proponent of Common Core. And the GWB-Controversy-Dodging-Dude has been weak on Second Amendment backing.

Rubio told Fox News host Neil Cavuto, in an interview prior to the debate, “Chris Christie has supported gun control. Chris Christie supported an assault weapons ban. That’s the reason that he got into politics to begin with.”

Christie denies all of these charges.

The problem for him – above and beyond the manner these liberal stances will be assessed by GOP primary voters – is that his denials are false. Not to mention, the former U.S. Attorney talks in circles (at times convincingly) in trying to repudiate his firmly and publicly stated positions.

On MSNB’s “Morning Joe”, the New Jersey Governor declared, “What I said about Sonia Sotomayor was that she deserved an up or down vote, but that she was not the type of justice I would select if I were president. That’s hardly supporting someone, that’s just saying someone should get an up or down note.”

The reality: Christie explicitly stated that he supported Obama’s nomination of Sotomayor. In 2009, PolitickerNJ, a New Jersey political website, reported that Christie stated:

“After watching and listening to Judge Sotomayor’s performance at the confirmation hearings this week, I am confident that she is qualified for the position of Associate Justice of the U.S. Supreme Court.”

“I support her appointment to the Supreme Court and urge the Senate to keep politics out of the process and confirm her nomination. Qualified appointees should be confirmed and deserve bi-partisan support. Chief Justice Roberts and Justice Alito deserved that support based on their work as Circuit Court Judges. So does Judge Sotomayor. As a result, I support her confirmation.”

And he finalized, with glee, about Sotomayor:

“This is a historic moment and her inspiring success story should not only make the Latino community proud, but all Americans.”

But it gets worse.

How about Christie donating to the abortion arsenal, Planned Parenthood – yup, he in fact personally donated to that insidious organization. In a 1994 article published in New Jersey’s newspaper The Star-Ledger, Christie admitted, ”I support Planned Parenthood privately with my personal contribution and that should be the goal of any such agency, to find private donations.”

And it gets much worse.

In that same Star-Ledger article, Christie added, ”It’s also no secret that I am pro-choice.”

With regard to Common Core, the NJ Governator initially strongly stood behind this educational program blunder. In 2010, he unleashed Common Core on his home state. A year later, he blustered, “This is one of those areas where I’ve agreed more with the president than not.” Christie further glorified the program, opining that it was “a building block in our state’s education system meant to ensure that teachers and districts can innovate within a framework of high expectations and accountability.” As late as the summer of 2013, he proliferated his positive energy toward the program, bubbling, “We’re doing Common Core in New Jersey and are going to continue.” And in his not-so-unusual cuddling affair with Barack Obama, Christie laughed off Republican complaints about Common Core as knee-jerk reactions, with a crowning denouncement of: “…if the president likes something, the Republicans in Congress don’t.”

Now to the Second Amendment…Marco Rubio wasn’t far off when he said that Christie’s support of an assault weapons ban was the reason why he got involved with politics. In a 1993 TV advertisement connected to his first failed bid for public office, Christie proclaimed, “The issue which has energized me to get into this race is the recent attempt by certain Republican legislators to repeal NJ’s ban on assault weapons.” His anti-gun rhetoric – and governing – has endured. After being elected to New Jersey’s helm in 2009, for instance, the Christie endorsed a number of initiatives in opposition to Second Amendment rights, one of which was banning .50 caliber guns. Thereafter, he maintained his longstanding firearm-restricting-stance, executing at least 10 gun-limiting bills in 2013 alone.

It’s certainly acceptable for a politician to change a view or two over time. People evolve. Circumstances in one’s personal life change, and in society as well. But constant flip-flopping is not tolerable, especially when it involves the most important of issues. Worse, is if someone lies about it. And Chris Christie has indeed lied about his positions on all of these matters. There is a grotesque pattern of fabricating by this Republican presidential candidate.

In a nationally televised Republican presidential debate this past summer, when talking about the very sensitive 9-11 attacks, Christie tried to enhance his credibility and close relationship with the disaster by claiming that he had been appointed U.S. Attorney of New Jersey by former President George W. Bush the day before 9-11. This was an outright lie. The truth is that he wasn’t appointed to this high law enforcement post until months later.

The ferocity of Christie’s falsehoods can be traced to his roots in elected office, when he ran for a county freeholder position in northern New Jersey. During the heat of that campaign’s primary, he told some very nasty stories about his Republican opponents, incumbent freeholders Edward Tamm and Cecelia Laureys. Specifically, in TV spots that he launched against them, Christie claimed that Tamm and Laureys were under investigation by the county prosecutor’s office. His claims, however, were false. Christie’s adversaries thereafter filed a slander lawsuit against him. By the time the case was resolved, however, Christie had won the battle of the campaign. But he lost the war with Tamm and Laureys. According to Tamm, two years later the case settled with Christie making a monetary payment to Tamm and Laureys, plus he was compelled to apology to them in print. And Christie did just that; in a local New Jersey newspaper, he procured an advertisement where he admitted his TV ad claims were not accurate and that “Neither of you were under investigation by the Morris County Prosecutor at any time.” Chris Christie lied about his political opponents, in effort to win a county election. In layman’s terms: that’s horrible. A guy like this shouldn’t be president.