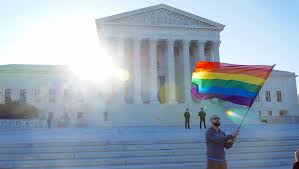 The New York State Division of Human Rights held that Albany’s Liberty Ridge Farm illegally rejected Melisa and Jennifer McCarthy from holding their wedding at the farm. Melissa and Jennifer McCarthy are a lesbian couple, and have argued that their civil rights were violated because Liberty Ridge refused the event on the basis of their sexual orientation. The case has been appealed to New York’s Appellate Division.

“The McCarthys were thrilled to find what they thought was the wedding venue of their dreams when they discovered Liberty Ridge Farm, a “one-of-a-kind” wedding venue that boasts a ‘picturesque setting for weddings all year round!’ But the farm’s owners, Cynthia and Robert Gifford, rejected them, stating they do not allow same-sex couples to get married at their business because they oppose same-sex marriage. But as the New York State Division of Human Rights ruled, under New York’s Human Rights Law, public businesses cannot discriminate on the basis of race, sexual orientation, national origin or other protected classes.”

Aside from their overuse of the word “But” in the above paragraph, the New York civil Liberties Union is otherwise wrong. Certainly gay people should have the right to be married under the laws of the State of New York, as well as the laws of every state in the union. The United States centuries’ of discrimination – in prohibiting such marriages – was violative of homosexuals’ Equal Protection Clause rights. However, in furthering gay people’s constitutional rights, the constitutional rights of others should not be encroached.

The owners of Liberty Ridge Farm have an undeniable First Amendment protection – the freedom to practice their religion as they wish. If they do not believe in gay marriage (because it is contradictory to their religious views), then they should not be compelled to organize and hold a homosexual wedding on their property. They should not be forced to provide services and wait on the participants of an event that violates their most sacred principles.

The fact that they are a business that caters to the public is irrelevant. Just because one opts to be an entrepreneur, doesn’t mean that he/she loses his/her constitutional rights. If Liberty Ridge Farm’s decision offends enough people, perhaps they will lose clients. That should be the only ramifications against them in the United States – not legal penalty.