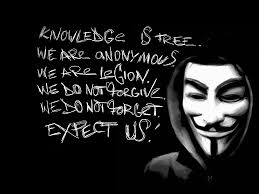 Within 24 Hours of Anonymous’ declaration of war on ISIS, over 3,800 ISIS-connected twitter accounts have been taken down.

In the video, which was spoken in French, Anonymous makes the following promise:

Anonymous from all over the world will hunt you down. You should know that we will find you and we will not let you go. We will launch the biggest operation ever against you,”

Anonymous is an international group of hackers who are known to interfere when they see a perceived injustice of great magnitude. In the past, they have hacked and leaked the servers of the Ferguson Missouri police department, as retribution for the perceived treatment of the protesters surrounding the Michael Brown charges.

October of 2015, Anonymous promised to expose the names of thousands of KKK members. Whether or not those names were leaked remains unclear. The current Anonymous war on ISIS is known as #opParis.

The video (which is in french) can be viewed below.