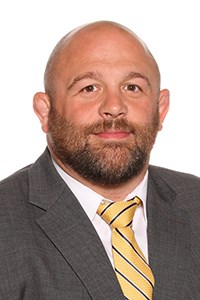 As found on the South Dakota State University’s website, below is head coach Damion Hahn’s bio. Learn about this coach’s career:

Damion Hahn is overseeing a successful rebuilding of South Dakota State University wrestling as he enters his third season at the helm of the Jackrabbits’ program.

During the 2019-20 season, the Jackrabbits returned to the winning side of the ledger in dual competition by posting a 12-6 overall record, including a 6-3 mark against Big 12 Conference opponents. Included in the dual victories were wins over nationally ranked Northern Iowa and Stanford.

SDSU also improved by six spots in the Big 12 Conference Wrestling Championship, finishing fourth in the team standings at the 2020 competition. Four Jackrabbit wrestlers earned automatic qualifying berths in the NCAA Division I Wrestling Championships, with another receiving a bid as an alternate. The NCAA Championships were later canceled due to the COVID-19 pandemic, but the National Wrestling Coaches Association selected 149-pounder Henry Pohlmeyer, 184-pounder Zach Carlson and 197-pounder Tanner Sloan as second-team All-Americans.

In his first season at SDSU, Hahn faced a rebuilding task as the Jackrabbits featured new starters in six spots in the lineup. SDSU finished with a 3-10 dual mark, including a 2-7 record against Big 12 foes. Pohlmeyer was the lone NCAA qualifier.

Hahn was hired at SDSU on April 9, 2018, following more than a decade of success as a member of the coaching staff at Cornell (N.Y.).

“Damion represents everything we are looking for in being able to take our wrestling program to the next level,” said SDSU Director of Athletics Justin Sell in announcing the hire. “His success both as a collegiate wrestler and coach, along with his ability to recruit high-achieving student-athletes on and off the mat, made him the ideal candidate. He is a tremendous ambassador for the sport who will work tirelessly to ensure wrestling thrives both on our campus and across the country.”

In accepting his first head coaching position, Hahn made a return to the Midwest. As a collegiate wrestler at Minnesota, Hahn won NCAA individual national titles as a junior and senior. A four-time All-American, he also was a three-time Big 10 individual champion and was named the Jesse Owens Big 10 Male Athlete of the Year in 2004. The Golden Gophers won team NCAA championships during both his freshman and sophomore seasons. He finished his collegiate career with a 118-21 record.

Hahn was inducted into the University of Minnesota’s M Club Hall of Fame in 2018.