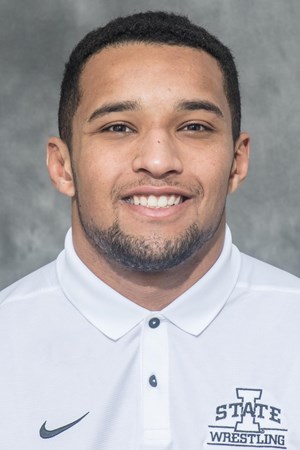 As found on Iowa State University’s website, below is Marcus Coleman’s bio. Learn about this wrestler’s career:

Wrestled to a 16-11 record, 8-6 dual, during his redshirt sophomore season… qualified for the NCAA Championships at 184 pounds and was seeded 23rd for the national tournament before the season ended early due to the outbreak of Covid-19 virus worldwide… qualified for the NCAA Championships with a fifth-place finish at the Big 12 Championship… made the switch from 174 pounds to 184 pounds in January… compiled a 12-7 record after the weight switch… wrestled a grueling schedule, taking on 14 wrestlers ranked in the final NCAA Coaches Poll throughout the season… second on the team in total dual back points (24)… tallied 20 dual takedowns on the year… won four matches by major decision, three pins and one technical fall.

Wrestled to a 28-14 record in his first season in the lineup for Iowa State… qualified for the 2019 NCAA Championships… took fifth place at the Big 12 Championship… tallied a 10-4 record in dual competition… tied for the team lead in dual-takedowns with 40 on the year… led the team in major decision wins with 10 and was second on the team in bonus-point wins with 16… finished sixth at the Southern Scuffle… earned a runner-up finish at the Last Chance Open and the Cyclone Open… finished fifth at the Lindenwood Open.

Redshirted his initial season as a Cyclone… compiled an impressive 24-2 record in his first season at Iowa State… only two losses came to UNI’s Big 12 Champ, Taylor Lujan… took first place at the Duhawk Open, Pat ‘Flash’ Flanagan Open, UNI Open and Lindenwood Open… finished third at the Grand View Open and the Cyclone Open… 17 of his 24 wins came by bonus-point margin… won five matches by fall, six by technical fall and 6 by major decision.

Born on March 24, 1999… son of Erica Andorf and Lamont Coleman… has one sibling, Blayke… majoring in Criminal Justice.”